Trump Calls for Recusal of Sotomayor, Ginsburg in Cases Involving Him 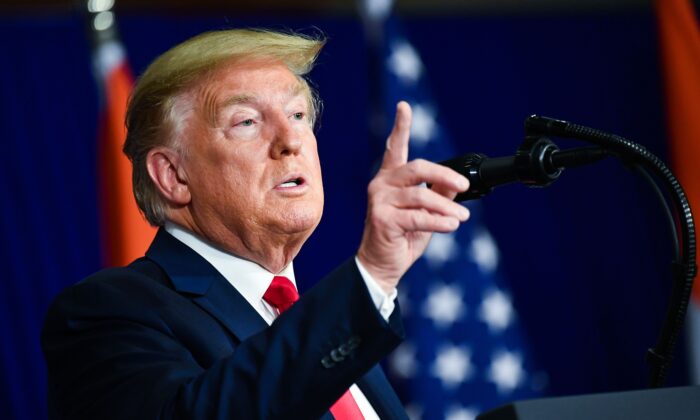 President Donald Trump said Supreme Court Justices Sonia Sotomayor and Ruth Bader Ginsburg should recuse themselves from any cases that involve Trump-related matters, citing statements they have made about him or his administration.

“I just don’t know how they can not recuse themselves for anything having to do with Trump,” he said at a Feb. 25 press availability during his trip to New Delhi.

Regarding Sotomayor, Trump was referring to her Feb. 21 dissenting opinion, in which she made a remark that at least some people interpreted as political.

She criticized the country’s highest court for recently overruling a number of lower-court decisions that blocked Trump’s policies, which some interpreted as accusing her colleagues of having a bias in favor of the administration.

“Perhaps most troublingly, the Court’s recent behavior on stay applications has benefited one litigant over all others,” she said (pdf).

“The way I look at it, she’s trying to shame people with perhaps a different view into voting her way,” Trump said.

Ginsburg, Trump said, should have recused herself years ago for her disparaging comments about him when he ran for office in 2016.

“She went wild during the campaign when I was running,” Trump said, suggesting the justice may have supported his then-opponent, former Secretary of State Hillary Clinton. “I don’t know who she was for or perhaps she was for Hillary Clinton if you can believe it.”

In July 2016, shortly before the Republican National Convention, when Trump formally secured the nomination, Ginsburg gave three high-profile interviews in five days in which she made negative comments about Trump.

“He has no consistency about him. He says whatever comes into his head at the moment. He really has an ego,” she told CNN, calling Trump a “faker.”

She also told The Associated Press she didn’t “want to think about that possibility” of Trump winning the presidency.

Trump said at the time that Ginsburg should resign.

“Judges should avoid commenting on a candidate for public office. In the future, I will be more circumspect,” she said in a statement.

“I wouldn’t say it was an apology,” he said. “But she sort of apologized.”

The president acknowledged that Supreme Court justices operate under a “different standard,” as they aren’t formally bound by the ethics rules of the judiciary. He said though it’s “the right thing to do.”

“I think it’s a higher standard in a certain sense. So they’ll have to decide what to do,” he said.

Because of the Republican majority in the U.S. Senate, Trump has been able to appoint a record-breaking number of federal judges. With his appointments of Justices Brett Kavanaugh and Neil Gorsuch, the nine-member Supreme Court now has five justices appointed by Republicans. Ginsburg and Sotomayor were appointed by Democratic Presidents Bill Clinton and Barack Obama, respectively.