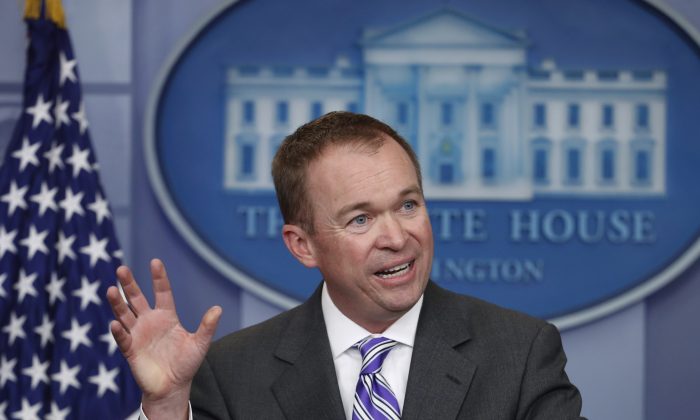 So far only a general outline, the budget blueprint “prioritizes rebuilding the military, including restoring our nuclear capabilities; protecting the nation and securing the border; enforcing the law as currently on the books; taking care of vets; and increasing school choice,” Mulvaney said.

The military should receive $603 billion, an almost 10 percent increase from the previous budget.

White House: Trump Budget Will Hike Defense Spending by $54B

Foreign aid represents about four percent of the discretionary budget (some $42 billion), leaving the administration to find significant savings across other sectors.

Discretionary spending, open to year-to-year changes by Congress, represents about 28 percent of the total budget—about $1 trillion. The rest, some $2.7 trillion, is spending mandated by law, like Social Security, Medicare, Medicaid, and veterans’ benefits.

The blueprint was sent to individual agencies and will be finalized in about a week. Congress should receive it by March 16, and the full budget should be completed in May, Mulvaney said.