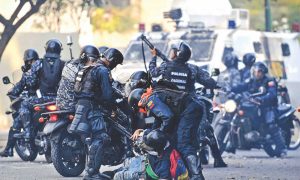 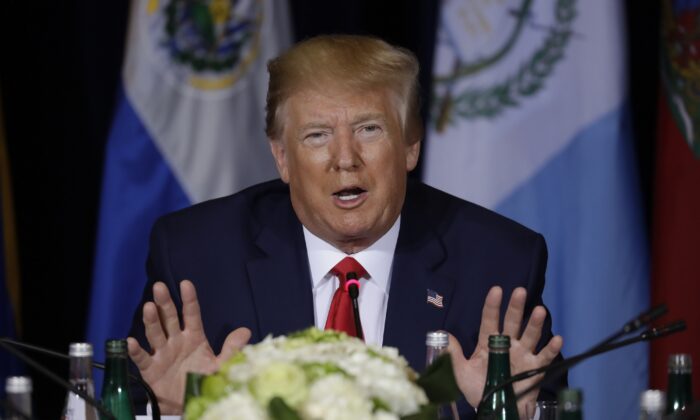 President Donald Trump speaks at a multilateral meeting on Venezuela at the InterContinental New York Barclay hotel during the United Nations General Assembly in New York on Sept. 25, 2019. (AP Photo/Evan Vucci)
US News

NEW YORK—President Donald Trump on Wednesday boosted U.S. humanitarian aid funding to Venezuela and barred members of the Maduro regime from entering the United States. Trump also reinforced his support for Venezuela’s elected head of the National Assembly Juan Guaidó on Wednesday, praising Latin American leaders who back him.

In a meeting on the sidelines of the annual United Nations gathering of world leaders, Trump told Latin American presidents who recognize Guaidó as Venezuela‘s rightful president that they were part of a “historic coalition.”

Guaidó in January invoked the constitution to assume a rival presidency more than eight months ago, calling for Maduro to step down and recognize Guaidó as interim president. Maduro has overseen a dramatic economic collapse and is accused of corruption, human rights violations, and rigging the 2018 presidential election.

Guaidó is recognized as Venezuela’s rightful leader by more than 50 countries, including the United States and neighboring Colombia. But Maduro remains in power with the backing of the armed forces and countries like Cuba, Russia, and China.

A delegation for Guaidó attended to the U.N. General Assembly in search of a breakthrough in its eight-month leadership challenge with Maduro. It has also been focused on getting the European Union to sanction Maduro officials with assets stashed in European countries.

The State Department said it would provide $36 million in humanitarian aid in Venezuela to go toward an underfunded U.N. program aiming at raising $223 million to serve 2.6 million people. Previous aid efforts within Venezuela have been marked by concerns Maduro would interfere with distribution.

“We’re giving millions and millions of dollars in aid, not that we want to, from the Maduro standpoint, but we have to,” Trump said during a news conference on Wednesday afternoon. “People are dying, they have no food, they (have) no water, they have no nothing.”

Addressing the U.N. General Assembly on Tuesday morning, Trump said Maduro is a “Cuban puppet … hiding from his own people while Cubans plunder Venezuela’s oil wealth to sustain its own corrupt communist rule.

“According to a recent report by the United Nation Human Rights Council, women in Venezuela stand in line for 10 hours every day waiting for food, over 15,000 people have been detained as political prisoners, modern-day death squads are carrying out thousands of extrajudicial killings,” Trump said.

The state department is also providing Venezuela with $52 million through the U.S. Agency for International Development (USAID). USAID said in a statement the funding will go towards independent media, civil society, the health sector, and the opposition-controlled National Assembly led by Guaidó if he is successful in ousting the regime.

Guaidó and his Latin American allies say that Maduro is a threat to regional stability, calling for countries to step up pressure on the regime. During his speech to the General Assembly on Wednesday, Colombian President Ivan Duque said he would provide the United Nations with a dossier proving Maduro was harboring armed Colombian rebels.

Washington’s travel ban applied to government officials with the rank of vice minister or above, military members with a rank of colonel or above, and members of Maduro’s parallel legislature called the Constituent Assembly.

It also banned anyone who acts “on behalf of or in support of” Maduro and those deriving “financial benefit” from the government, and their immediate family members. U.S. officials have previously said such measures were effective because “these people’s wives can’t shop in the U.S.”

While the EU has sanctioned several individual members of Maduro’s government, Guaidó, the United States, and other Latin American countries have called on it to do more.

A group of European and Latin American countries met to discuss Venezuela on the sidelines of the United Nations on Wednesday afternoon.

In a joint statement, the Lima Group of Latin American countries and the European-led International Contact Group said they “reaffirmed their unwavering commitment to a return to democracy” in Venezuela during the meeting. The statement did not mention sanctions.

Spanish Foreign Minister Josep Borrell, the incoming top diplomat for the EU, said during the meeting that the “end of Venezuela‘s crisis should result from a peaceful and negotiated path” leading to free elections, according to an EU statement.

By Luc Cohen. The Epoch Times contributed to this report.