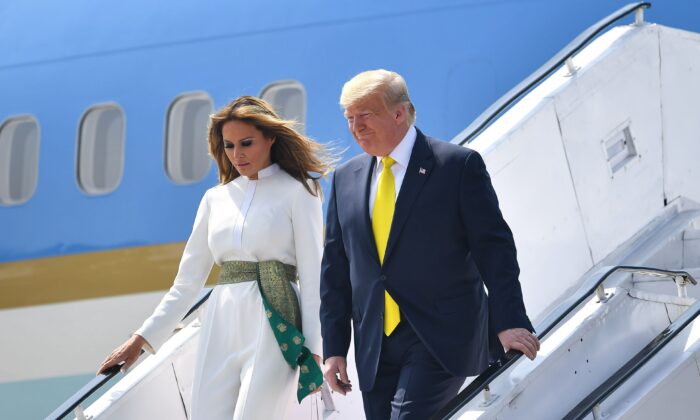 President Donald Trump has landed at Sardar Vallabhbhai International Airport in Ahmedabad, India, as he begins his two-day visit to the country—his first official trip to the country since taking office.

Touching down in the South Asian country, Trump was greeted by Indian Prime Minister Narendra Modi with a warm hug before embarking on a tour of Mahatma Gandhi’s Sabarmati Ashram, the former home of Indian independence leader Mahatma Gandhi.

The president and the Indian prime minister will then begin a 14-mile roadshow from the airport to India’s new cricket stadium, the world’s largest, where crowds of more than 110,000 people have gathered to welcome the U.S. president.

From Ahmedabad, Modi, the president, and his entourage are expected to travel to Agra at 3:30 p.m. local time where he will take a tour of the iconic Taj Mahal before sunset. They will then leave for the main leg of the trip in New Delhi, where they are expected to discuss a number of U.S.-Indo trade deals.

Some of his demands have not been well received by Modi’s government, which fears that things such as the free import of U.S. dairy items may have a negative impact on Indian farmers.

The unrestricted flow of foreign goods was one of the reasons India cited for walking out of the proposed Regional Comprehensive Economic Partnership held in Bangkok in November last year.

India, meanwhile, is more concerned with the restoration of the Generalized System of Preference (GSP) benefits, allowing duty-free entry of thousands of products from designated countries, which the United States canceled last year.

“The U.S. cancelation of GSP was received with dismay here in India. There has to be some give-and-take and it is hoped from the Indian side that the United States, which has been tough with all countries, friend and foe, would relent and support the growing economy of India,” Dr. S. Chandrasekharan, Director of India-based South Asia Analysis Group, told The Epoch Times.

Speaking in Washington earlier this month, Trump said he was willing to sign a trade deal with India “if it is the right one.”

“They [Indians] want to do something and we’ll see … if we can make the right deal, [we] will do it,” news agency IANS quoted Trump as saying.

Trump appeared in high spirits as he departed Washington on Feb. 24, alongside First Lady Melania Trump, his daughter Ivanka Trump, and her husband Jared Kushner, writing on Twitter that he was looking forward to “being with my great friends in India!”

Ahead of his arrival, India’s Prime Minister Narendra Modi also tweeted: “India awaits your arrival @POTUS @realDonaldTrump! Your visit is definitely going to further strengthen the friendship between our nations. See you very soon in Ahmedabad.”

The president’s visit to India may also serve as an opportunity to increase the 2.4 million-strong Indian-American voter base in the United States—those who typically vote Democrat, according to the National Asian American Survey (pdf). In 2016, only 16 percent Indian Americans voted for Trump, the survey said.