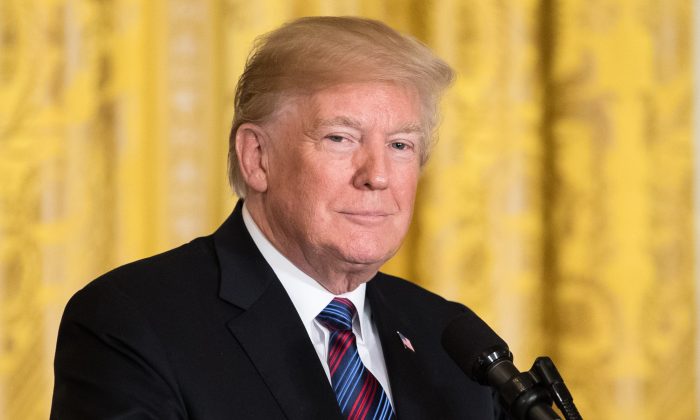 President Donald Trump at a Joint Press Conference with the Baltic States Heads of Government in the East Room of the White House in Washington on April 3, 2018. (Samira Bouaou/The Epoch Times)
Trump Administration

President Donald Trump earned the highest approval rating in more than 11 months on Wednesday, with 51 percent of likely American voters applauding his job performance, according to Rasmussen Reports.

Trump’s rating is higher than President Barack Obama’s during the same period. Obama received a 46 percent approval rating on April 4, 2010.

Compared to the three previous presidents, Trump earned his approval rating while facing overwhelmingly negative coverage from mainstream media. Coverage of Trump during his first 60 days in office was three times more negative than Obama and twice as negative as coverage of presidents George Bush and Bill Clinton, according to the Pew Research Center.

A survey of media coverage by the Media Research Center showed that news coverage on ABC, CBS, and NBC was more than 90 percent negative in September, October, and November last year.

The majority of Americans are seeing through much of the media’s bias. A March 26 Rasmussen poll found that 52 percent of likely U.S. voters thought that reporters who write or talk about Trump are trying to block his agenda.

Rasmussen reports its approval ratings based on a rolling three-day average of survey results from 1,500 likely U.S. voters. The margin of error is +/- 2.5 percent.