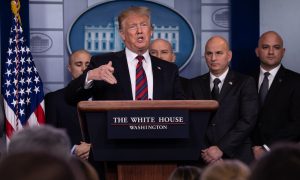 President Donald Trump told reporters in the Rose Garden that he has appointed a team, led by Vice President Mike Pence, that will meet with a Democratic group over the weekend to resolve the border wall standoff that prompted a partial government shutdown—at the same time standing firm on his funding demands.

At the Jan. 4 open press conference, Trump reiterated his calls for $5.6 billion in funding for the U.S.–Mexico border wall, after earlier talking for more than two hours with congressional Democratic leaders.

Trump said he’s not willing to reopen the government until the border is secure.

“We have to get a structure built,” he said, adding that they are “very firm” on the requested funding number.

Trump described the immigration situation at the Southern border as a “dangerous, horrible disaster.”

Meanwhile, Pence, who only spoke briefly, said that the country is “in the midst of a crisis on our southern border.” It’s unclear at this stage who will be part of the weekend talks. Trump only confirmed that Pence would be attending.

The president said he had told congressional leaders at the meeting that the shutdown could go on for months or years, but he told reporters he hopes “it doesn’t go on even for a few more days.”

He called the meeting that Speaker Nancy Pelosi and Sen. Chuck Schumer (D-N.Y.) also attended “productive,” adding that they are all on the same path in wanting to end the shutdown.

House Minority Leader Kevin McCarthy, R-Calif. said, “There was progress today, and I look forward to solving it.” Schumer meanwhile described the meeting as “somewhat contentious.”

But Trump said he is not doing it for himself.

“I’m very proud of doing what I’m doing… I don’t call it a shutdown. I call it ‘doing what you have to do for the safety and the benefit of our country.’”

DACA—Deferred Action For Childhood Arrivals, the immigration policy that protects individuals brought to the United States illegally as children—was also part of the discussions, although Trump did not elaborate on the details, saying he is waiting for the Supreme Court decision.

In September 2017, Trump issued an executive order ending DACA, which has been established by executive order by President Obama. A district court issued an injunction barring Trump’s executive order from taking affect, and in November 2018 the Ninth Circuit Court of Appeals upheld the decision, which the Trump administration has appealed to the Supreme Court.

When asked if he had considered using emergency powers to build the wall without Congress, the president said he had thought about it.

“Yes, I have thought about it. We can do it, I may do it. We could call a national emergency and do it quickly,” he told reporters.