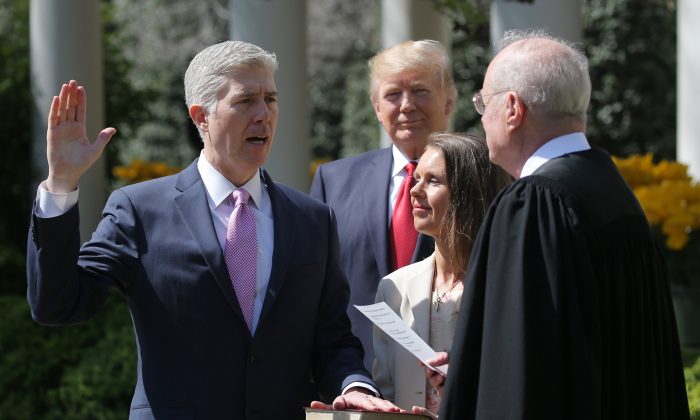 Judge Neil Gorsuch (L) is sworn in as an associate justice of the Supreme Court by Supreme Court Associate Justice Anthony Kennedy (R) , as U.S. President Donald J. Trump (C) watches with Louise Gorsuch in the Rose Garden of the White House in Washington on April 10, 2017. (REUTERS/Carlos Barria)
Politics

WASHINGTON—President Donald Trump’s appointee Neil Gorsuch on Monday showed himself to be a frequent and energetic questioner during U.S. Supreme Court arguments in his first day hearing cases as a justice, at one point even apologizing for talking too much.

Gorsuch, whose confirmation to the lifetime job restored the court’s conservative majority, exhibited composure and confidence, sitting on the far right of the bench in the ornate courtroom, alongside Justice Sonia Sotomayor.

The first of the three one-hour arguments before the justices on Monday involved an employment dispute. Gorsuch grilled lawyer Christopher Landau, who represented a man claiming he was discriminated against by the U.S. Census Bureau, over the fine points of a law governing civil service employees.

The justices, with the exception of the usually silent Clarence Thomas, are known for their aggressive questioning, and Gorsuch showed no qualms about jumping right in.

“I apologize for taking up so much time,” the black-robed Gorsuch said, sitting back in his high-backed chair and smiling.

Chief Justice John Roberts welcomed Gorsuch to the court before oral arguments began. “Justice Gorsuch, we wish you a long and happy career in our common calling,” Roberts said.

Gorsuch responded by thanking his new colleagues for their “warm welcome.”

In total, Gorsuch stepped in three times during the first one-hour argument, on each occasion asking a string of questions about the complicated federal law at issue. As he indicated during his Senate confirmation hearing last month, his line of inquiry focused on the text of the statute, an approach also embraced by the man he replaced on the court, Antonin Scalia, and other conservative jurists.

Citing a section of the Civil Service Reform Act, Gorsuch asked Landau where in the statute does it say federal district courts may hear cases involving both discrimination and civil service claims.

“Looking at the plain language of the statute, just help me with that,” Gorsuch said.

The court had its full complement of nine justices, five conservatives and four liberals, for arguments for the first time since Scalia’s death in February 2016.

The second case he heard involved a property dispute. One of the lawyers in the case, Neal Katyal, was a familiar face to Gorsuch, having heartily endorsed his nomination to the high court, even testifying at his Senate Judiciary Committee confirmation hearing.

The third case, to be argued later in the day, involved a dispute over whether certain securities class-action lawsuits can be barred because they were filed too late.

Gorsuch formally joined the Supreme Court on April 10 after being confirmed three days earlier by the Republican-led Senate over broad Democratic opposition.

Gorsuch, at 49 the youngest new justice in a quarter century, served for a decade on the Denver-based 10th U.S. Circuit Court of Appeals before Trump nominated him in January. Trump was able to fill Scalia’s vacancy only because Senate Republicans last year refused to consider Democratic former President Barack Obama’s nominee Merrick Garland.

The second case involved whether a developer can intervene in a lawsuit brought by a property owner against the town of Chester, New York over its refusal to give him permission to build on his land. Katyal, who served as acting solicitor general in Obama’s Justice Department, represented the town.

Katyal, who regularly argues cases in the court, is also scheduled to argue before the justices on April 25 on behalf of Bristol-Myers Squibb Co. in a case over out-of-state injury claims.