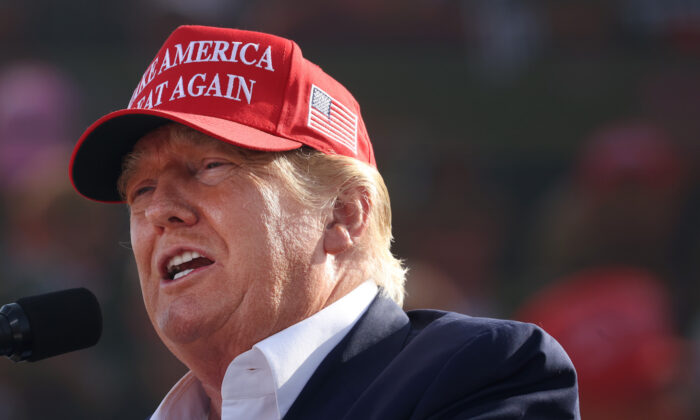 Former President Donald Trump speaks to supporters during a rally at the I-80 Speedway in Greenwood, Nebraska on May 1, 2022. (Scott Olson/Getty Images)
Donald Trump

Trump Appeals for Halt of Daily $10,000 Contempt of Court Fine

Former President Donald Trump has asked an appeals court to suspend his $10,000-a-day fine for contempt of court after New York judge Arthur Engoron last week denied a request to reverse it.

Engoron ruled in April that Trump violated a court order by missing a March 31 deadline to hand over documents in response to a subpoena served on him by the Office of the Attorney General (OAG) as part of an ongoing investigation into the business practices of his family company, the Trump Organization.

Engoron kept in place the fine on April 29 despite a request from Trump’s lawyers, stating it was due to his failure to comply with the subpoena issued by the state attorney general, Letitia James.

Trump, who has hinted that he might run for president again, is appealing the contempt finding.

In a phone interview with Bloomberg on Monday, the Republican branded the judge in the case “unfair”.

“We have a judge that frankly has been unbelievably unfair,” Trump said. “We’ve given millions and millions of pages and he says, ‘give more, give more, always give more’.”

Engoron said on Friday that he was not satisfied with an affidavit provided by Trump attesting to his and others’ inability to locate documents sought by the OAG, CNBC reports.

Those affidavits, the judge said, were not sufficient to purge Trump of being held in contempt.

Trump’s lawyer, Alina Habba, asked a New York appeals court to pause the fine, which she called “patently improper and impermissible by law.”

She also insisted that her client doesn’t have any personal records that are responsive to the subpoena, which includes all of Trump’s mobile phone records, documents from Trump Tower in Manhattan, and “all electronic devices issued by the Trump Organization to Trump’s executive assistants.”

Trump “did exactly what was required of him: Appellant (and his representatives on his behalf) performed a diligent, thorough and comprehensive search for all of the documents and items called for in the subpoena and provided complete and accurate responses to the OAG,” Trump’s lawyers said in a filing.

James, a Democrat, also claimed that Trump’s children, Donald Trump, Jr., and Ivanka Trump have “all been closely involved in the transactions in question,” adding that “We won’t tolerate their attempts to evade testifying in this investigation.”

Trump’s organization has already handed over more than 6 million pages of records as part of the subpoena, according to Bloomberg, however, the state has said he still needs to review his own records, including those of his cell phones among others.

Trump told Bloomberg in Monday’s phone call that James’s case against him was politically motivated.

The Epoch Times has contacted a spokesperson for James for comment.

Trump’s lawyers last week filed a sworn affidavit in which he said he didn’t turn over subpoenaed documents to the AOG because he doesn’t have them. But the judge said that was insufficient.

“Simply put, Appellant has made extraordinary efforts to comply with the OAG’s subpoena which not only satisfy but far exceed his obligations by law,” Habba said in Monday’s filing.

“Given these circumstances, it is unconscionable and indefensible for Appellant to be held in contempt in any manner, must less at the inordinate expense of $10,000 per day.”