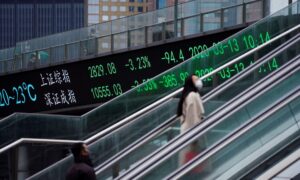 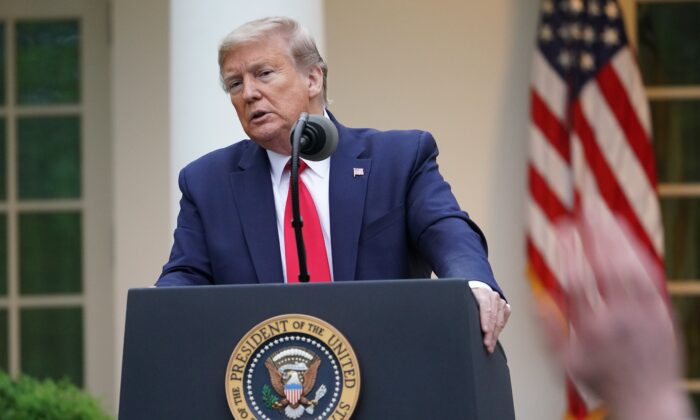 President Donald Trump speaks during the daily briefing on the CCP virus in the Rose Garden of the White House in Washington on April 14, 2020. (Mandel Ngan/AFP via Getty Images)
Trump Presidency

President Donald Trump on Tuesday announced he will be enlisting advisers from nearly all sectors of American commerce, the medical field, and elected office to join a new “task force” dedicated to reopening the United States’ economy after it was ravaged by the CCP (Chinese Communist Party) virus.

The president said his administration will be speaking to the groups “over the next very short period of time, in many cases, tomorrow,” and will do so “by telephone, because we don’t want people traveling right now.” Trump said that those named on the list were “the best and the smartest, the brightest and they’re going to give us some ideas,” on how to reopen the economy following its CCP virus-induced shutdown.

Shortly after the president’s briefing, the White House released a list of nearly 200 executives, economists, scholars, and industry leaders who together will form various Great American Economic Revival Industry Groups. The groups will “work together with the White House to chart the path forward toward a future of unparalleled American prosperity,” and “produce a more independent, self-sufficient, and resilient nation,” according to a White House press release.

Names among the list include Apple’s Tim Cook, some of the nation’s largest banks, such as Bank of America, Goldman Sachs, and Morgan Stanley, massive defense contractors such as Lockheed Martin and Northrop Grumman, and former Secretary of State Condoleezza Rice and billionaire entrepreneur Mark Cuban, who have both been critical of Trump in the past. Trump and the White House did not explain exactly what role the groups would have in the process of reopening the U.S. economy.

Elsewhere during Tuesday’s press conference, Trump said that plans to reopen the country were “close to being finalized” and that some governors across the United States can “very, very shortly, if not almost immediately,” open up their states, but said he will announce a specific date soon, adding that the date will be “in the very near future.” Trump said he was aware of “over 20 states” that were in “extremely good shape” and could potentially reopen “before the date of May 1,” while other states will follow.

Trump’s comments contrast with warnings by Dr. Anthony Fauci, the government’s top infectious disease expert, who on Tuesday cautioned against reopening the nation too early as it does not yet have the critical testing and tracing procedures needed to do so. “We have to have something in place that is efficient and that we can rely on, and we’re not there yet,” Fauci told The Associated Press, before calling the May 1 target date “a bit overly optimistic” for many areas of the country.

Fauci expressed concerns that new outbreaks may arise in locations where social distancing has eased, and that public health officials don’t yet have the capabilities to rapidly test for the virus, isolate any new cases, and track down everyone that an infected person came into contact with. The infectious disease expert said that social-distancing rules in place in much of the country would have to occur on a “rolling” basis, and not all at once.