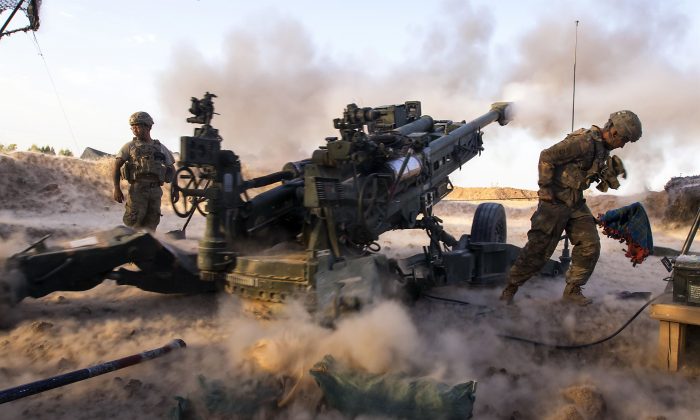 President Donald Trump announced on Saturday that the Syrian city of Raqqa has been liberated from ISIS.

“I am pleased to announce that the Syrian Democratic Forces, our partners in the fight against ISIS in Syria, have successfully recaptured Raqqah,” Trump said in a statement. “Together, our forces have liberated the entire city from ISIS control.”

Trump said in his statement that defeating ISIS and countering the spread of its hateful ideology was one of his core campaign promises.

Trump praised America’s coalition partners for “the sacrifices they have made in this noble effort.”

The loss of Raqqa is a major blow to the terrorist group, which had declared the city as the capital of its so-called caliphate.

Raqqa was the group’s last major stronghold, following its recent loss of Mosul in Iraq. The terrorist group is now being pushed into the Euphrates River Valley, and its self-proclaimed state is ending.

According to Drew Berquist, a former intelligence officer and editor-in-chief of OpsLens, ISIS was well aware that “these two capitals would fall and they needed to branch out.” The terror group had sent members into Libya, Yemen, other parts of Africa, and Europe.

For ISIS, being pushed out of Raqqa and Mosul means “they’re going to have less funds coming in, less command and control infrastructure,” said Berquist. He added that it also “crushes their will,” and this will likely weaken their resolve to fight in the region.

This may not be absolute, however. According to Robert J. Bunker, adjunct research professor at the Strategic Studies Institute at U.S. Army War College, “The caliphate is literally being torn to shreds—but ISIS will wear it like a martyr’s shroud for ongoing propaganda and recruitment purposes.”

ISIS will have “bragging rights,” he said, that it took a coalition of nations and factions backed by the United States and Russia to topple their regime, and they’ll likely use this to recruit terrorists.

Bunker noted, as did Berquist, that ISIS had “seen their territorial demise coming and have been physically and ideologically planning for it.” Bunker said this may mean that the group was moving personnel and financial resources out of the region with this in mind.

Bunker said that ISIS may go underground, taking the form of an insurgency in Syria and Iraq, and try to launch terrorist attacks against the West while looking for regions with weak governments where it can again establish control.

He added, however, that the U.S. military will likely continue to fight ISIS wherever it tries to take power. He said, “The U.S. will follow them—unless, of course, Russia or some other regional power has allies in the area and they go after ISIS themselves.”

Examples of this were already seen on Oct. 16, when the Pentagon’s DoD News reported that U.S. forces had killed “dozens of ISIS members” during strikes on ISIS training camps in Yemen, coordinated with the Yemeni government. The report noted that “Yemen has been a hub for terrorist recruiting, training, and transit.”

The eventual collapse of the ISIS “caliphate” was inevitable, according to Max Abrahms, professor of political science at Northeastern University.

Abrahms, who has dedicated much of his research to studying the methods used by terrorist organizations and political regimes, says the use of violence against civilian populations is a fast track to self-destruction.

Since ISIS—also called the Islamic State—declared its caliphate in 2014, Abrahms said, “I predicted hundreds and hundreds of times the implosion of the Islamic State, because this is a group that behaves in a manner that will doom a militant group.”

He noted that many think tanks have been proven wrong in their analysis of ISIS, as some said its use of violence against civilians, its propaganda videos with gory violence, and its strict and brutal methods of control were deemed as strategic.

“It just tried to kill anybody, all over the world. And this basically united the world against the group,” Abrahms said. “But the think tank community, for years, since June 2014, has been lauding every decision of Islamic State as strategic. Groups that use violence in this fashion have historically paid a steep price.”

The defeat of ISIS was accelerated under the Trump administration, which removed red tape from the battlefield and established a clear mission to kill terrorists. Defense Secretary Gen. Jim Mattis said in May that the United States had switched to “annihilation tactics” against ISIS, and that “our intention is that the foreign fighters do not survive the fight to return” to their home countries.

Vice President Mike Pence said during an Oct. 13 press conference that “thanks to the president’s leadership, ISIS is on the run.”