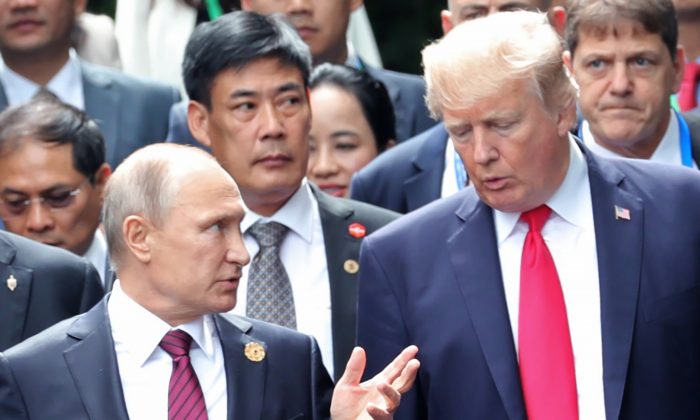 Meeting on the sidelines of the APEC conference in Vietnam, President Donald Trump and Russian President Vladimir Putin agreed to continue open channels of military communications that they say have resulted in greater losses to ISIS.

The two presidents said in a joint statement that enhanced de-conflicting efforts, such as increased communications between their militaries, have proven successful and will continue until the ISIS terror group is defeated.

With both Russian and United States military personnel operating in Syrian airspace, there has been a longstanding concern of a potential accident and subsequent conflict between the two.

Military communications between the United States and Russia have been suspended several times, most recently in April following a U.S. airstrike on a Syrian airfield in retaliation for chemical weapons use by the Syrian regime. Russian troops were present on the airbase.

Trump and Putin also agreed that there is no military solution to the conflict in Syria.

Instead, they say that constitutional reform and free and fair elections under UN supervision are needed.

In the joint statement, the leaders “urged all Syrian parties to participate actively in the Geneva political process and to support efforts to ensure its success.”

A U.N. security council resolution adopted on Dec. 18, 2015, calls for “an inclusive and Syrian-led political process that meets the legitimate aspirations of the Syrian people.”

However, that political process never happened, and instead over 400,000 people have been killed according to U.N. numbers since the start of the conflict in 2011.

“The successful implementation of the agreements announced today will save thousands of lives‎,” the statement quotes Trump as saying.

Trump told reporters aboard Air Force One on Nov. 11 that the agreement was the result of just a few conversations between him and Putin.

“We had two or three very short conversations because of the meeting, the fact that we’re at a meeting. But during those conversations, we talked about Syria and de-conflicting,” Trump said.

“We have areas where … their troops are facing our troops and there’s nothing in between,” Trump said.

“You’re talking about millions and millions of lives. This isn’t baby stuff. This is the real deal. And if Russia helped us, in addition to China, that problem would go away a lot faster,” Trump said.

He said that relations between Russia and the United States have been damaged by a “fake barrier” that was created by false allegations of collusion between him and Russia during the 2016 campaign.

“When will all the haters and fools out there realize that having a good relationship with Russia is a good thing, not a bad thing. There [sic] always playing politics—bad for our country. I want to solve North Korea, Syria, Ukraine, terrorism, and Russia can greatly help!,” Trump wrote on Twitter on Nov. 11.

When will all the haters and fools out there realize that having a good relationship with Russia is a good thing, not a bad thing. There always playing politics – bad for our country. I want to solve North Korea, Syria, Ukraine, terrorism, and Russia can greatly help!

He also pointed to the fact that former President Barack Obama, as well as his Secretary of State Hillary Clinton, had attempted to improve relations with Russia after Obama came to office in 2009, but were unable to do it.

In 2009, soon after coming to office, Obama called for a “reset” in relations with Russia during a visit to Moscow.

Just a few months earlier, Secretary of State Clinton had in Geneva presented her Russian counterpart, Russian Foreign Minister Sergey Lavrov, with a big red symbolic button labeled “reset” in English, but famously mislabeled with the wrong Russian translation for the word “reset.”

“Does the Fake News Media remember when Crooked Hillary Clinton, as Secretary of State, was begging Russia to be our friend with the misspelled reset button? Obama tried also, but he had zero chemistry with Putin,” Trump said on Twitter.

Does the Fake News Media remember when Crooked Hillary Clinton, as Secretary of State, was begging Russia to be our friend with the misspelled reset button? Obama tried also, but he had zero chemistry with Putin.

Relations between Russia and the United States sharply deteriorated during Obama’s second term in office, including over Ukraine and the conflict in Syria.