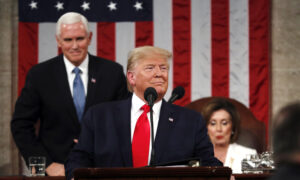 Trump SOTU Speech: 'No Parent Should Be Forced to Send Their Child to a Failing Government School'
0 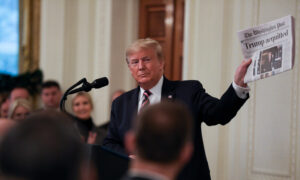 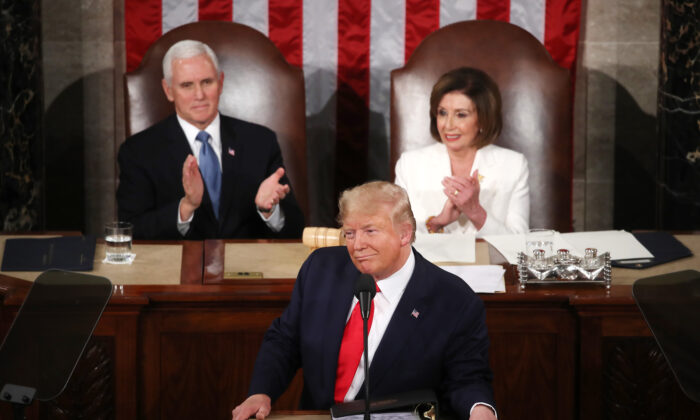 President Donald Trump delivers the State of the Union address as House Speaker Rep. Nancy Pelosi (D-Calif.) and Vice President Mike Pence look on in the chamber of the U.S. House of Representatives in Washington on Feb. 4, 2020. (Mark Wilson/Getty Images)
Politics

Trump and Pelosi Trade Barbs on Heels of Senate Acquittal

President Donald Trump and House Speaker Nancy Pelosi (D-Calif.) traded barbs after the Senate acquittal, both offering contrasting points on the impeachment inquiry and trial, which have dominated American politics and media headlines for the past few months.

It started at the 68th national prayer breakfast in Washington where Trump and Pelosi sat just tables away from each other as they gave their first public remarks since senators voted virtually along party lines to acquit the president of the two charges against him: abuse of power and obstruction of Congress.

Trump vowed to protect religious liberty at the annual event before using the opportunity to speak out against the impeachment trial. As he walked onto the stage, Trump held up two different newspapers that both bore the word “acquitted” across the front.

“My family, our great country, and your president have been put through a terrible ordeal by some very dishonest and corrupt people,” Trump said. “They have done everything possible to destroy us, and by so doing, very badly hurt our nation. They know what they are doing is wrong, but they put themselves far ahead of our great country.”

He also made an apparent dig at Pelosi, who said in September she was praying for the president “all the time” in an interview days after announcing that the House was starting its impeachment inquiry.

After the breakfast event, Pelosi took the opportunity to provide a detailed explanation for why she tore up a copy of Trump’s prepared State of the Union remarks in her weekly press conference. She told reporters that the president lied to the American people on a number of major topics.

“It was, in my view, a manifesto of mistruths, of falsehoods, blatantly, really dangerous to the well-being of the American people if they believed in what he said,” she said. “So again, we do not want the chamber of the House of Representatives to be used as a backdrop of his reality shows with unreality in his presentation.”

A day before the Senate acquittal, Trump delivered an optimistic State of the Union address on Feb. 4. The president at times contrasted the success of his administration against the alleged failures of his predecessor, Democratic former President Barack Obama. Pelosi claimed that Trump misrepresented the facts on a number of topics, including the economy, healthcare, and welfare programs.

“I tore up a manifesto of mistruths,” the speaker said.

On Feb. 5 senators voted 52–48 on the first article of impeachment and 53–47 on the second article. None of the Democrats voted to acquit the president on either article. Sen. Mitt Romney (R-Utah) broke with his party to vote to convict Trump of abuse of power.

Following the prayer breakfast and as noon approached, Trump spoke at the White House about the failed impeachment efforts against him, describing them as a continuation of attempts that started the moment he declared his bid for the presidency in 2015.

The moment was not a news conference or a speech, Trump said. “It’s a celebration.”

“We went through hell, unfairly,” he said. “We did nothing wrong.”

“It started from the day we came down the elevator … and it never really stopped. We’ve been going through this now for over three years,” he said.

At the packed White House event, which included a number of cabinet members, other administration officials, and lawmakers, Trump again held up a newspaper with the front page headline: “Trump acquitted,” triggering a lengthy round of applause.

Pelosi held her weekly press conference between the breakfast and Trump’s remarks to the nation at the White House. She touted Romney, the only Republican to break with his party and vote to convict Trump on one of the articles of impeachment.

The speaker also said that Trump’s remarks at the breakfast were “completely inappropriate.”

“We do pray for the United States of America. I pray for him, President Bush, President Obama. It is a heavy responsibility,” Pelosi said. “I pray hard for him because he is so off the track of our Constitution, our values, our country, the air our children breathe, the water we drink, and the rest. He needs our prayers.”

Ivan Pentchoukov and Zachary Stieber contributed to this report