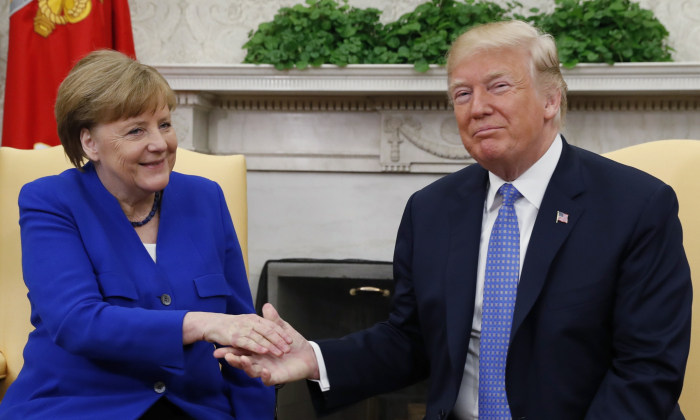 Trump and Merkel Meet Over Iran and Trade

WASHINGTON—German Chancellor Angela Merkel and U.S. President Donald Trump put on a display of warmth and friendship during a White House meeting on Friday despite differences over trade and Iran that have sparked tensions between the two allies.

After their last White House meeting drew attention when the two leaders did not shake hands in the Oval Office, Trump made a point of doing just that, twice, while congratulating the German chancellor on her election win.

Merkel acknowledged that it took a while to form a government after heavy election losses to parties who benefited from the backlash against her policy of letting hundreds of thousands of refugees to settle in Germany. She said it was important to her to make her first trip out of Europe since establishing her administration to Washington.

Merkel acknowledged that Trump was likely to pull out of the multinational Iran nuclear deal.

The Iran deal, looming U.S. tariffs on European steel and aluminum products, a planned Russian gas pipeline running under the Baltic Sea to Germany, and Berlin’s military spending are issues that divide Merkel and Trump and likely to come up at their working lunch.

When asked if Germany was doing enough to reach a NATO target for member countries to spend 2 percent of economic output on defense annually, new U.S. Secretary of State Mike Pompeo told a news conference in Brussels: “No … (Germany) should meet the goals that they agreed to … that’s the expectation, not only for Germany but for everyone. We’re hopeful that at the NATO summit that every NATO partner will deliver a credible plan to achieve that goal.”

Trump said he did not expect to come to an agreement on Iran during their meeting.

French President Emmanuel Macron made the European position on the Iran nuclear deal clear ahead of Merkel’s visit. On Wednesday, he called on the United States not to abandon the Iran deal as Western envoys said Britain, France, and Germany were nearing an agreement on a package they hope could persuade Trump to save the pact.

Trump will decide by May 12 whether to revive U.S. sanctions on Iran.

Ahead of Merkel’s trip, German officials said they expected U.S. tariffs on European steel and aluminum products to kick in on May 1, when an exemption expires. But they said Germany would try to negotiate a broad package including other industries.

“I think the chancellor would prefer a broad dialogue with the Americans. The government is open to extending the package to other duties and trade barriers,” one official said.

In Washington, a White House official said the United States would press Germany about trade deficits that “pose risks to global economic stability”, and “would like to remove barriers … to trade so that we can level the playing field”.

“We want to work with Berlin on global unfair trading practices because those are impacting our economies in equal measure,” he said.

(Additional reporting by Paul Carrel and Andrea Shalal in Berlin and Lesley Wroughton and Robin Emmott in Brussels; Writing by Jeff Mason and Paul Carrel; Editing by Yara Bayoumy and Alistair Bell)