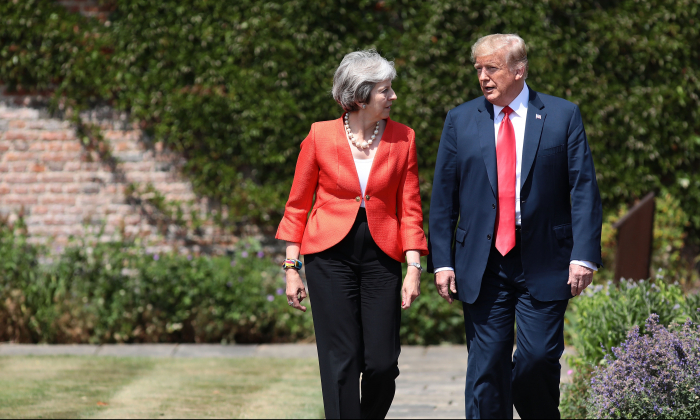 President Donald Trump and U.K. Prime Minister Theresa May reaffirmed deep ties between their nations in a joint interview in Chequers, United Kingdom, on July 13.

The statements from the two leaders came one day after The Sun, a British tabloid newspaper, published an interview with Trump which was editorialized to focus on select criticisms Trump expressed about May’s approach to Brexit but omitted his broad praise for America’s biggest ally and the prime minister.

“I didn’t criticize the prime minister. I have a lot of respect for the prime minister,” Trump said, saying that the newspaper omitted his positive comments about May. He also pointed out that the interview was also recorded by his staff in an effort to combat “fake news.”

The Sun interview features remarks by Trump criticizing May’s approach to Brexit and a suggestion this may imperil a future trade deal between the two countries. Trump referred to the Sun article as “fake news.” Trump and May said they are looking to lock in a trade deal.

Trump explained that he based his comments on reports he read suggesting there would be difficulty in securing a deal with the United Kingdom if May pursued a “soft” Brexit plan. But the president noted that after speaking with May he was convinced a trade deal would be possible.

“Whatever you want to do that’s okay with us. Just make sure we can trade together. That’s all that matters,” Trump said about the Brexit process. “The United States looks forward to finalizing a great bilateral trade agreement with the United Kingdom. This is an incredible opportunity for our two countries and we will seize it fully.”

“We agreed today that as the U.K. leaves the European Union we will pursue an ambitious U.S.-U.K. free trade agreement,” May said. The deal would reduce tariffs, she added.

Both leaders lauded the military alliance between the United States and the United Kingdom. May referred to joint operations to thwart chemical attacks in Syria, defeat the ISIS terrorist group, protect Eastern Europe, and enforce sanctions against North Korea.

“No two countries do more together than ours to keep their people safe and prosperous and we want to deepen that cooperation even further to meet the shared challenges we face now and in the years ahead,” May said.

In meetings before the press conference, Trump and May discussed joint efforts to prevent nuclear proliferation and fight terrorism. May said that the United Kingdom supports Washington’s withdrawal from the Iran deal and the progress Trump made toward denuclearizing North Korea at his summit between North Korean leader Kim Jong Un.