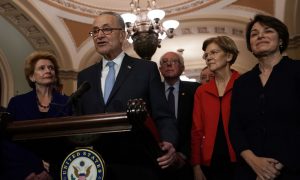 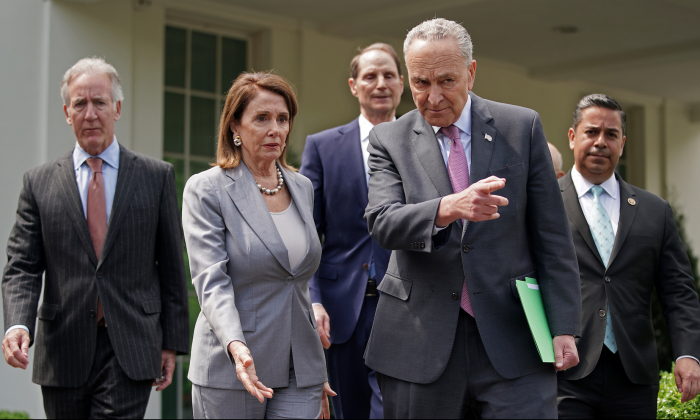 Trump and Democrats Agree $2 Trillion Is Needed for Infrastructure

The rare agreement between the White House and Democrats settled on a spending figure only. The two sides will meet again in three weeks to determine how to pay for the plan.

“We agreed on a number, which was very, very good, $2 trillion for infrastructure. Originally, we had started with a lower—even the president was eager to push it up to $2 trillion,” Schumer said.

The White House praised the group of 12 Democrats who agreed on the spending figure, calling the meeting “excellent and productive.” Both sides agreed that repairs and upgrades are past due for the nation’s roads, bridges, tunnels, railroads, airports, and broadband internet.

“The United States has not come even close to properly investing in infrastructure for many years, foolishly prioritizing the interests of other countries over our own,” White House press secretary Sarah Sanders said in a statement. “We have to invest in this country’s future and bring our infrastructure to a level better than it has ever been before.”

Both sides showed support for an infrastructure bill. If passed, the measure would be a rare example of bipartisan legislative success.

“We just had a very productive meeting with the president of the United States,” House Speaker Nancy Pelosi (D-Calif.) told reporters at the White House on April 30. “We did come to one agreement: That the agreement would be big and bold.”

While both sides are supportive of the measure, White House chief of staff Mick Mulvaney said a deal is unlikely because Democrats wouldn’t support environmental deregulation, which the Trump administration insists is needed to speed up construction.

“I think there is a much better chance of getting the USMCA passed than getting the infrastructure bill passed,” Mulvaney said, referring to the new trade deal with Canada and Mexico.

Paying for the plan also may cause the parties to clash. Democrats are calling for most of the plan to be paid for by the federal government. Trump’s economic adviser Larry Kudlow told reporters on April 29 that the president hasn’t decided on whether to support a federal tax on gasoline to fund the infrastructure investment.

The rare consensus was reached as House Democrats are using investigative powers to scrutinize Trump’s personal life and finances. The investigations ramped up after special counsel Robert Mueller concluded an investigation into Russia’s interference in the 2016 presidential election. Mueller found no evidence of coordination between the Trump campaign and Russia.

The meeting took place as Democrats initiated further probes of the president, but the Democratic leaders said the topic didn’t come up during the meeting.

“In previous meetings, the president has said, ‘If these investigations continue, I can’t work with you.’ He didn’t bring it up. And so, I believe we can do both at once,” Schumer said.

Trump wants to accelerate permit approvals to boost construction projects as part of any infrastructure plan, White House counselor Kellyanne Conway said earlier April 30. She warned Democrats not to try to include their ideas on combating climate change in any legislation.