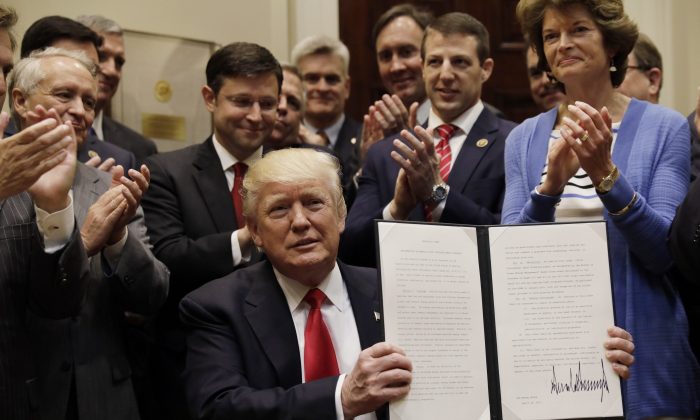 WASHINGTON—President Donald Trump signed an executive order on Friday to extend offshore oil and gas drilling to areas that have been off limits—a move meant to boost domestic production.

Trump had campaigned on a promise to do away with Obama-era environmental protections that he said were hobbling energy development without providing tangible benefits, pleasing industry and enraging environmental advocates.

The president of the American Petroleum Institute trade group welcomed the order in a statement, while an API official said the order could help the industry over the long term. The official did not respond to a request for comment directly about current offshore lease demand.

“In order to meet U.S. energy needs, it is important to keep options open for the long term, so industry can start planning for and determining where the best prospects are and then make those investments the global economy will require over time,” the official said, asking not to be named.

The order directs the U.S. Department of Interior to review and replace the Obama administration’s most recent five-year oil and gas development plan for the outer continental shelf, which includes federal waters off all U.S. coasts.

Jill McLeod, a partner at international law firm Dorsey & Whitney, said Trump’s order was a positive signal to the oil industry but was unlikely to trigger a surge in exploration in the near term given the costs.

“The lifting of the ban does not necessarily make drilling in the Arctic a compelling proposition,” she said.

Environmental groups, including Oceana and the Center for Biological Diversity, criticized the order and promised to fight it in court. Democratic senators also opposed the order, saying it could threaten the fishing and tourism industries.

Friday’s order came on the heels of a separate decree by Trump this week triggering a review of federally managed land to determine if they were improperly designated as national monuments by former presidents. The move is intended to expand federal areas available for development.