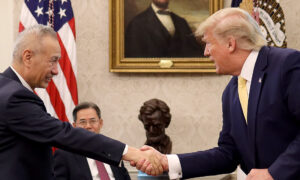 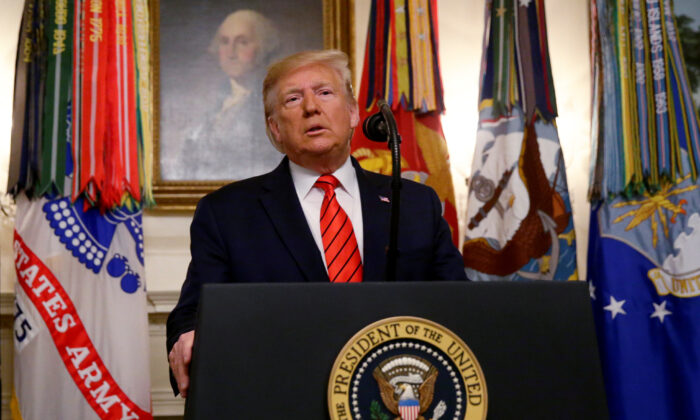 Trump: ‘Ahead of Schedule’ on China Trade Deal

WASHINGTON—U.S. President Donald Trump said on Oct. 28 he expected to sign a significant part of the trade deal with China ahead of schedule but did not elaborate on the timing.

“We are looking probably to be ahead of schedule to sign a very big portion of the China deal, we’ll call it Phase One but it’s a very big portion,” he told reporters at Joint Base Andrews before leaving on a visit to Chicago.

Leaders of the world’s two biggest economies are working to agree on the text for a “Phase 1” trade agreement announced by Trump on Oct. 11. Trump has said he hopes to sign the deal with Chinese leader Xi Jinping next month at a summit in Chile.

Trump on Monday said the signing was planned for the summit but made a reference to recent political unrest in Chile and said he believed they could work things out.

The U.S. president said the phase one portion would “take care of the farmers” and “also take care of a lot of the banking needs.”

Agricultural products are a major area of discussion.

Beijing wants the United States to cancel some existing U.S. tariffs on Chinese imports, according to people briefed on high-level telephone discussions on Friday, in return for pledging to step up its purchases of U.S. commodities like soybeans.

The United States wants Beijing to commit to buying these products at a specific time and price, while Chinese buyers would like the discretion to buy based on market conditions.

Beijing and Washington are trying to calm a nearly 16-month trade war. Trump agreed earlier this month to cancel an Oct. 15 increase in tariffs on $250 billion in Chinese goods as part of a tentative agreement on agricultural purchases, increased access to China’s financial services markets, improved protections for intellectual property rights and a currency pact.

By Alexandra Alper and Doina Chiacu