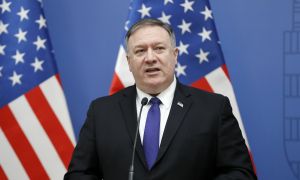 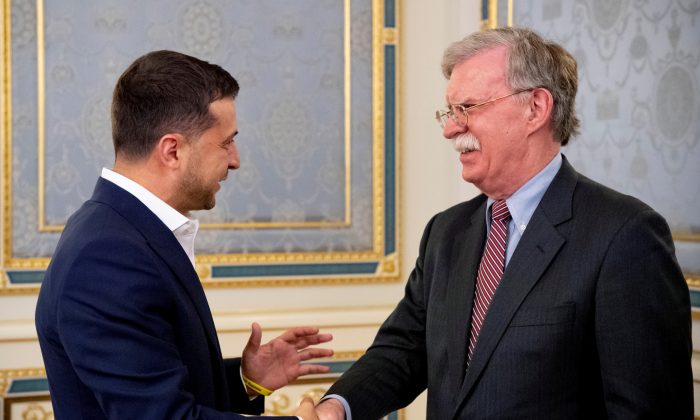 KIEV—U.S. President Donald Trump’s national security adviser told Ukraine on Aug. 28 to avoid being lured into China‘s orbit by what he called Beijing’s “debt diplomacy” amid a Chinese move to buy a Ukrainian aerospace giant.

The United States sees pro-Western Ukraine as an ally on the frontline of its geopolitical tussle with Russia, Kiev’s Soviet-era overlord, but Bolton used his two-day trip to warn of intellectual property theft by China and unfair trade practices.

John Bolton’s warning to Ukraine comes as Washington is locked in a trade war with Beijing and has sounded the alarm over China‘s rapid technological advances and the global clout of its technology giant Huawei.

Asked about a pending deal for China to acquire Ukrainian aircraft engine maker Motor Sich, Bolton told reporters he did not want to discuss specific transactions and that such deals were a sovereign matter for Kiev.

But Bolton, who is the first senior U.S. official to visit Ukraine since President Volodymyr Zelenskiy swept to power in May, made clear that Washington disapproved of the deal.

“We laid out our concerns about … unfair Chinese trade practices, threats to national security we’ve seen in the United States…,” he said at a news conference in Kiev.

The Chinese firm Beijing Skyrizon Aviation Industry Investment signed a deal in 2016 to acquire a stake in Motor Sich, although the deal was blocked by Ukrainian security services who opened an investigation into suspected sabotage.

A series of court hearings were held, but the court ruled that the shares could be sold and a deal is now pending approval by Ukraine’s national anti-monopoly committee.

Motor Sich was forced to sever ties with Russia, its biggest client, due to sanctions imposed by Kiev on Moscow to punish it for its 2014 annexation of Crimea and support for pro-Russian separatists in eastern Ukraine.

The output of Motor Sich, which makes engines for both civil and defense planes and helicopters, fell 40 percent after it lost access to the Russian market.

Bolton said he had an “outstanding” meeting with Zelenskiy, writing on Twitter that he was “very impressed by his commitment to real reform to benefit the Ukrainian people.”

Zelenskiy, a former television comedy star, scored a landslide election victory in May and strengthened his power base in a parliamentary election last month.

Bolton said he had also discussed the possibility of a meeting between Zelenskiy and Trump in Poland soon.

Ukraine and China have increased partnerships in recent years, as the former is badly in need of cash to bolster its infrastructure, while the latter wants to get its hands on Ukrainian technologies.

Ukraine is also a major partner in Beijing’s “One Belt, One Road” initiative (OBOR, also known as Belt and Road). According to China’s official OBOR website, Ukraine and China inked a cooperative agreement under the OBOR framework in 2015.

According to Chinese media reports, Ukraine was among the first countries to publicly announce support for OBOR, launched in 2013 as a project Beijing claims would build up trade routes linking China, Southeast Asia, Africa, Europe, and Latin America. Under OBOR, China has invested in infrastructure projects in more than 60 countries.

It isn’t known precisely how much of Ukraine debt is owed to China, but according to a policy paper issued by the Center for Global Development, a Washington D.C.-based think tank, in March, Ukraine’s debt to China stood at $1.59 billion as of the end of 2016.