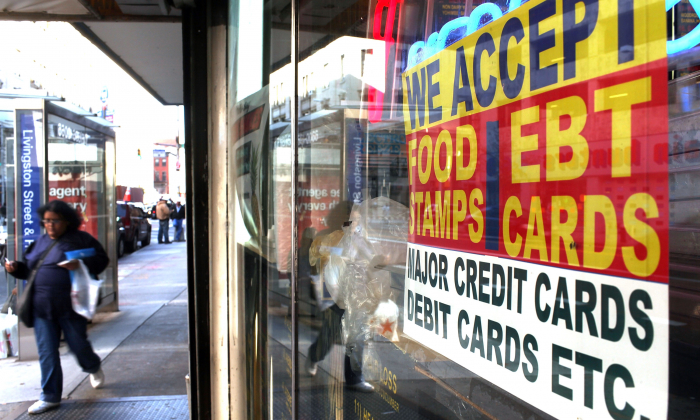 A sign in a market window advertises the acceptance of food stamps in New York City on Oct. 7, 2010. (Spencer Platt/Getty Images)
Politics

The Trump administration is set to announce changes to the federal food stamp program that would strengthen eligibility requirements for certain categories of aid recipients, cutting benefits while encouraging self-sufficiency amid record low unemployment.

Department of Agriculture officials will announce the finalized modifications to parts of the Supplemental Nutrition Assistance Program (SNAP) on Wednesday, according to Bloomberg News. The new rule is expected to be published in the Federal Register on Thursday.

The changes affect able-bodied adults without dependent children (ABAWD). The new rules would, according to earlier estimates by the U.S. Department of Agriculture (USDA), cut benefits for 755,000 people who would not meet stricter eligibility requirements.

Agency officials also said that the rule changes would save taxpayers $1.1 billion in the first year and $7.9 billion over five years.

“The reduction in transfers represents a 2.5 percent decrease in projected SNAP benefit spending over this time period,” the USDA said.

Citing sources familiar with the matter, Bloomberg reported that the finalized version of the rule will make it more difficult for states to gain waivers from a requirement that food stamp recipients either work or are enrolled in a vocational training program.

Draft amendments to the rule, called the Requirements for AbleBodied Adults Without Dependents, were subject to a public consultation period after they were proposed in February.

“Federal law generally limits the amount of time an able-bodied adult without dependents can receive Supplemental Nutrition Assistance Program benefits to 3 months in a 36-month period, unless the individual meets certain work requirements,” the USDA said in a summary of the ABAWD draft. However, the rules allowed State agencies to waive the time limit and extend SNAP eligibility for able-bodied adults if the unemployment rate in a given area was relatively high or where there was a lack of sufficient jobs.

The USDA sought to reduce the time limit waivers to “encourage broader application of the statutory ABAWD work requirement, consistent with the administration’s focus on fostering self-sufficiency.”

“Right now, nearly half of ABAWDs live in areas that are covered by waivers despite a strong economy,” the USDA said. “The Department believes waiver criteria need to be strengthened to better align with economic reality. These changes would ensure that such a large percentage of the country can no longer be waived when the economy is booming and unemployment is low.”

The agency added that introducing the rule’s 7 percent floor, in combination with limits on combining areas, would cut waiver eligibility for 33 percent of able-bodied adults without dependents, noting that if the draft was introduced as is, “an estimated 11 percent of ABAWDs would live in areas subject to a waiver” as opposed to the current 44 percent.

In seeking public comments, the USDA noted it was considering a 6 percent, 7 percent, or 10 percent floor for the “20 percent standard.”

The revised food stamp eligibility requirement for ABAWDs are among three changes the USDA is seeking to introduce following the President’s Executive Order on Reducing Poverty in America by Promoting Opportunity and Economic Mobility. The order provided guiding principles for public assistance programs, including encouraging employment and economic independence by strengthening work requirements for people able to work.

“Since its inception, the welfare system has grown into a large bureaucracy that might be susceptible to measuring success by how many people are enrolled in a program rather than by how many have moved from poverty into financial independence,” the executive order said. “This is not the type of system that was envisioned when welfare programs were instituted in this country. The Federal Government’s role is to clear paths to self-sufficiency, reserving public assistance programs for those who are truly in need. The Federal Government should do everything within its authority to empower individuals by providing opportunities for work, including by investing in federal programs that are effective at moving people into the workforce and out of poverty.”

Overall, the three rule changes would put forward stricter work requirements for eligibility, change the way states automatically enroll families into SNAP when they receive other types of federal aid, and cap deductions for utility allowance.

The draft proposals were published in the Federal Register this year: Requirements for Able-Bodied Adults Without Dependents, or ABAWD (pdf), in February, the Revision of Categorical Eligibility in the Supplemental Nutrition Assistance Program, also known as broad-based categorical eligibility (BBCE) (pdf), in July, and the Standardization of State Heating and Cooling Standard Utility Allowances, or SUA (pdf), in October.

The USDA argues the SNAP reforms are a way to save money and help eliminate what it sees as the widespread abuse of the program.

“Some states are taking advantage of loopholes that allow people to receive the SNAP benefits who would otherwise not qualify and for which they are not entitled,” USDA Secretary Sonny Perdue told reporters in July.

“Unfortunately, automatic eligibility has expanded to allow even millionaires and others who simply receive a TANF-funded brochure to become eligible for SNAP when they clearly don’t need it,” Lipps said.

President Donald Trump has long argued that many Americans using SNAP do not need it given the strong economy and low unemployment, and should be removed as a way to both save taxpayers billions of dollars and encourage self-reliance and upward social mobility.

If enacted, the BBCE rule alone would save the federal government about $2.5 billion a year by removing 3.1 million people from SNAP, according to the USDA.

The Congressional Budget Office in December estimated that the categorical eligibility rule change could save the federal government $8.1 billion from 2019 to 2028, a figure lower than USDA predictions.

A study by the Urban Institute (pdf) found that the three programs together, if implemented last year, would cut food stamps for an estimated 3.7 million people and 2.1 million fewer households, while reducing taxpayer expenditures by $4.2 billion per year.

“We estimate that if these changes had been implemented in 2018, 3.7 million fewer people and 2.1 million fewer households would have received SNAP, and annual benefits would have decreased by $4.2 billion. Some states would face substantial reductions in participation and benefits, but others that make little or no use of time-limit waivers or broad-based categorical eligibility would be minimally affected,” the study said.