America Essay Contest: Why Did They Put Everything on the Line?
0
Share Now
FacebookTweetParlerEmail
Copy Link 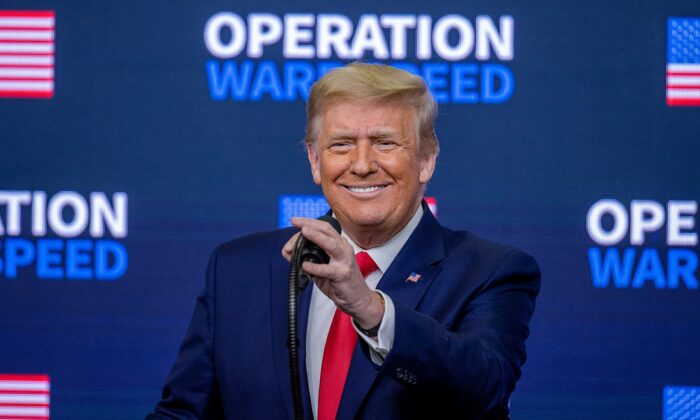 President Donald Trump’s administration is working to place sweeping new restrictions on asylum eligibility in its latest effort to curb both legal and illegal immigration.

In a new 419-page rule (pdf) from the Department of Homeland Security (DHS) and Department of Justice (DOJ), the administration said it would create additional bars to asylum eligibility and limit the circumstances in which individuals can qualify for protection; changes that it notes “are likely to result in fewer asylum grants annually.”

The new regulations would broaden judges’ power to claim asylum applications are “frivolous,” a ruling that would bar any form of immigration relief, deny requests from being approved, and deny requests without a hearing if the claims are deemed to lack certain evidence.

The new rules also say that asylum seekers must prove that they will suffer “a severe level of harm” if they were to return to their home country.

Currently, asylum seekers who claim they have a “credible fear of persecution or torture” if they return to their home country are eligible for asylum status. Asylum grants individuals deportation protections and work authorization. After one year, asylees are eligible to apply for permanent lawful status.

The administration rule clarifies that “persecution” does not include: “every instance of harm” caused by criminal or military unrest in a country; any treatment that the U.S. considers “unfair, offensive, unjust, or even unlawful or unconstitutional;” harassment; or “threats with no actions taken to carry out the threats.”

Individuals who claim that they will face persecution based on gender or gang violence, among other grounds, would also generally not qualify for asylum under the new rules.

The changes also outline several factors that immigration officials must consider in the asylum process that would potentially disqualify individuals from protection. These include whether migrants crossed into the U.S. illegally, used fraudulent documents, failed to pay their taxes, or passed through other countries without seeking protective status there first.

“The Departments note that these changes are likely to result in fewer asylum grants annually due to clarifications regarding the significance of discretionary considerations and changes to the definition of ‘firm resettlement.’ However, because asylum applications are inherently fact-specific, and because there may be multiple bases for denying an asylum application, neither DOJ nor DHS can quantify precisely the expected decrease,” the administration wrote in the rules.

The rule will take effect 30 days after it is published in the Federal Register on Friday.

Aaron Reichlin-Melnick of the American Immigration Council, an immigration advocacy group, said, “Under this rule, asylum would be taken out of reach for a large percentage of people who in the past would have been able to qualify.”

In his 2016 bid for the White House, President Trump vowed to curtail immigration and illegal entry into the United States, including by expanding the border wall with Mexico.

His administration has pushed for and implemented a range of related policies while in office, including a rule earlier this year that makes individuals who traveled through another country to reach the United States and who arrived at the southern border on or after July 16, 2019, ineligible for asylum unless they applied for asylum in one of the countries through which they traveled.

Victims of severe forms of sex trafficking and those who came to the United States through countries that are not parties to international treaties regarding refugees are excluded from the rule.