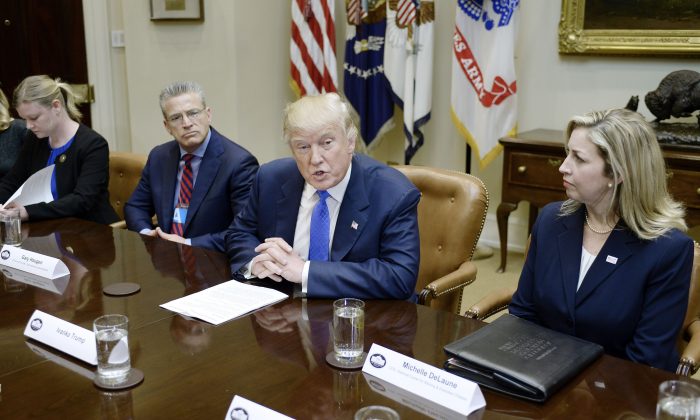 President Donald Trump speaks during a listening session on domestic and international human trafficking in the Roosevelt Room of the White House in Washington on Feb. 23, 2017. (Oliver Douliery/Pool-Getty Images)
Trump Administration

US to Provide Jamaica With $4.5 Million in Battle Against Human Trafficking

The Trump administration reiterated its commitment on July 25, in providing assistance to Jamaica in the battle against human trafficking, a hidden epidemic that’s continuing to grow across the globe.

Speaking at a conference, Mark Seibel, deputy chief of mission of the U.S. Embassy in Jamaica, said that the U.S. government intends to provide $4.5 million in aid to Jamaica.

“I am proud to say that our partnership against trafficking in persons is strong and growing,” Seibel said at the National Task Force Against Trafficking In Person’s (NATFATIP) conference on July 25.

The monetary assistance comes from the “Child Protection Compact Partnership” made between both countries at the end of May. The joint partnership is one of the latest efforts by the U.S. government to clamp down on human trafficking and will be completed over a four-year plan.

Civil groups or international organizations that collaborate with Jamaica’s National Taskforce will receive foreign assistance aimed at improving policies and practices to hold perpetrators of child trafficking criminally accountable, among a list of other prevention strategies. The funding will not be provided directly to Jamaica’s government.

Jamaica remained on the “tier 2 watch list,” according to the U.S. State Department’s annual Trafficking In Persons (TIP) report released on June 28. Countries on the tier 2 watch list do not meet the minimum standards for the Trafficking Victims Protection Act (TVPA) but are making “significant efforts” to be in compliance with the standards.

The report notes that although Jamaica’s government did not meet the minimum standards, it demonstrated increased efforts since the previous report.

At the conference, Seibel said a range of U.S government departments will help provide sponsored training programs, public sensitization campaigns and guest speakers to address trafficking from the perspective of prevention, protection, and prosecution.

Also speaking at the July 25 conference, Jamaica’s Permanent Secretary of the Ministry of Justice, Carol Palmer, and the Chair of NAFTATIP said that “No country is spared; no border is safe,” citing the Global Slavery Index report released in July that found 40 million people in the world are trafficking victims.

“There is a need for robust monitoring and evaluation tools, which are scientifically applied to countries as a fair and objective means of assessing the work and progress in the anti-trafficking effort,” she said.

According to the Global Slavery Index, almost 3 out of 1000 people in Jamaica are living in modern slavery.

Echoing her sentiments at the two-day event was Jamaica’s National Security Minister, Horace Chang, who called for a collective national response to stem the tide of trafficking through the collaborative efforts of the government and NGOs.

Chang continued by saying that human trafficking presents a threat to the country’s safety and security and often involves major organized crime networks that exploit victims for financial gain.

“The clandestine nature of this crime demands that every single Jamaican assume responsibility to join the fight to stop traffickers in their tracks. It is impractical to think that a Government-alone response will be effective,” he said.

The minister also called on the media to play a bigger role in exposing and condemning the illegal activity.

In April, the largest human-trafficking portal in the United States, Backpage.com, was shut down by the FBI. It came shortly after President Donald Trump signed into law a bill that stopped the shielding of website operators from state criminal charges or civil liability if they facilitate sex ads or prostitution.

Trump has put tackling human trafficking at the forefront of his presidency. He signed an executive order in February 2017 directing the government to “identify, interdict, disrupt, and dismantle the transnational criminal organizations that engage in human trafficking.”