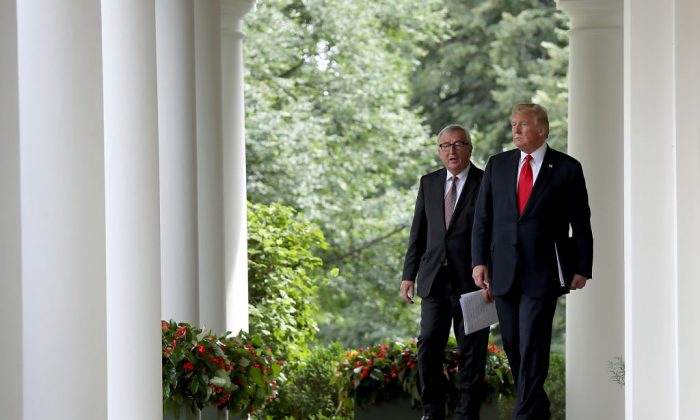 President Donald Trump’s administration has downgraded the diplomatic status of European Union diplomats in the United States, a change reportedly made without notifying Brussels.

The development means that Washington-based diplomats are now less likely to be invited to high-profile events, EU officials said Jan. 8. The diplomats also have a lower importance level as compared to those who served during former President Barack Obama’s administration.

The political snub was highlighted at the Dec. 5 funeral of former U.S. President George H.W. Bush. At that time, Europe’s envoy was among the last diplomats to be called to pay respects.

The U.S. State Department didn’t respond to a request for comment on the change in protocol, citing the partial government shutdown—now in its 18th day—and limited communications staff. The White House also didn’t respond.

The status downgrade was confirmed by two other EU diplomats. One said it was unlikely for the EU to retaliate.

“We understand that there was a recent change in the way the diplomatic precedence list is implemented by the United States’ protocol,” a Commission spokeswoman told a briefing, declining to give more details.

“We are currently discussing with the relevant services in the administration possible implications for the EU delegation in Washington.”

In the past, Trump has criticized the EU for treating the United States unfairly.

Previously on Twitter, the president highlighted the cost provided by the United States for the military backing of NATO. U.S. investment in the EU is three times higher than in Asia, according to EU data. The United States and the EU also have the world’s biggest bilateral trade ties. Trump also has supported Britain’s departure from the bloc.

“Europe has to pay their fair share for Military Protection. The European Union, for many years, has taken advantage of us on Trade, and then they don’t live up to their Military commitment through NATO. Things must change fast!” Trump wrote on Twitter in November.

EU officials can still meet their U.S. counterparts. The change in protocol comes after Trump withdrew from several international agreements backed by the EU and vowed to reform “the liberal international order” he says the bloc helps underpin.

Talks between Washington and Brussels were sidelined around the end of last year because of the U.S.–Mexico–Canada Agreement (USMCA).