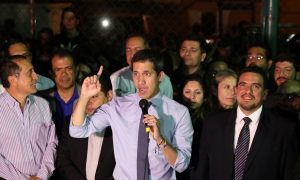 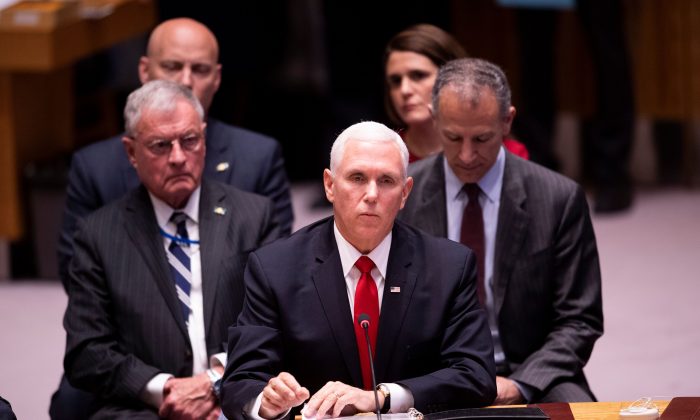 Vice President Mike Pence speaks during a Security Council meeting about the situation in Venezuela at the United Nations in New York, on April 10, 2019. (JOHANNES EISELE/AFP/Getty Images)
Trump Administration

US Calls on UN to Revoke Credentials of Maduro’s Regime

The Trump administration on April 10 called on the United Nations to revoke the U.N. credentials of illegitimate dictator Nicolás Maduro’s socialist regime and to instead recognize the internationally recognized interim president, Juan Guaidó.

Vice President Mike Pence, as part of the administration’s latest effort to pressure the embattled dictator to step down, said that the United States has drafted a U.N. resolution and called on all states to support it.

“The time has come for the United Nations to recognize interim President Juan Guaidó as the legitimate president of Venezuela and seat his representative in this body,” Pence told the U.N. Security Council.

In February, both the United States and Russia failed in rival bids to get the Security Council to adopt resolutions on Venezuela.

The United States was the first country to recognize Guaidó as Venezuela’s rightful leader. Guaidó also has the support of more than 50 nations internationally.

When asked if the United States thought it had enough backing to oust Maduro’s government at the United Nations, Pence said: “I think the momentum is on the side of freedom.”

Russia and China have, for years, fed billions of dollars to Maduro’s regime through loans and energy deals.

Russian U.N. Ambassador Vassily Nebenzia accused the United States of provoking an artificial crisis to oust Maduro and replace him “with their own pawn,” actions he described as a “lawless, thuggish violation of international law.”

“We call on the United States to once again recognize that the Venezuelan people and other peoples have the right to determine their own future,” Nebenzia said. “If you want to make America great again—and we are all sincerely interested in seeing that—stop interfering in the affairs of other states.”

Like Russia, Maduro also has dismissed Guaidó as a “U.S. puppet.”

The United States had called the meeting to discuss the humanitarian situation. U.N. aid chief Mark Lowcock told the council that there is a “very real humanitarian problem” in Venezuela.

“The scale of need is significant and growing. The United Nations is working in Venezuela to expand the provision of humanitarian assistance,” Lowcock said. “We can do more to relieve the suffering of the people of Venezuela if we get more help and support from all stakeholders.”

He briefed the council on a recent U.N. report on the situation that estimates that about a quarter of Venezuelans are in need of humanitarian assistance, painting a dire picture of millions of people lacking food and basic services.

Some 3.4 million Venezuelans have left the country, with the United Nations predicting that number will rise to some 5 million by the end of the year.

Days ago, the U.S. Treasury Department announced new sanctions on 34 vessels owned or operated by Venezuelan state-run oil company PDVSA that carry oil to customers outside the region. It also sanctioned two shipping operators and a vessel that delivered oil to Cuba in February and March.

The department reiterated that the United States continues to push for a transition to democracy in Venezuela.