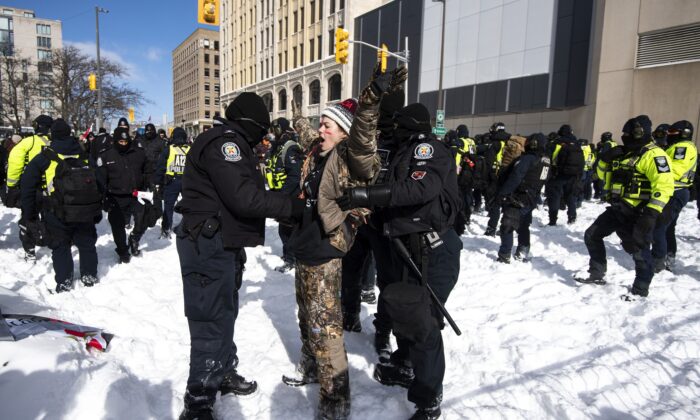 A protester sings “O Canada” as they are arrested after trying to push through a line of police officers during police action to end the Freedom Convoy protest in Ottawa on Feb. 18, 2022. (The Canadian Press/Justin Tang)
Viewpoints

The invocation of the Emergencies Act—a modern-day version of the War Measures Act—was the action of a federal government in total disarray and panic. There was no pressing emergency facing the population of Canada. The only person experiencing an emergency was Prime Minister Trudeau as he watched his credibility and support as a national leader swirling down the drain in the face of peaceful but growing Freedom Convoy protests.

The blockades at border crossings were certainly becoming a problem. The costs due to restricted trade were rising quickly and pressure was mounting from businesses and leaders on both sides of the border to address the issue. Police intervened and reopened all of the border crossings without violent confrontations and without the use of the Emergencies Act.

Body armour, firearms, and ammunition were seized from a group near the border crossing in Coutts, Alberta, and 13 people were arrested. This was of concern as we don’t know what the intentions of this group were but again, police addressed that issue without the need for any extra powers granted through the Emergencies Act. While a handful of people with malintent and firearms could certainly cause a lot of harm, it was hardly an insurrection threatening the sovereignty of the nation.

By the time Trudeau and his cabinet invoked the Emergencies Act on Feb. 14, the only outstanding issue was the ongoing protests settled into downtown Ottawa. The occupation was becoming problematic. While the protesters were remarkably peaceful considering the number of them and the length of time they had been entrenched, the lack of an end-game plan on their part made the situation untenable. The government couldn’t simply accept that they had taken over a part of the city and leave them there indefinitely. Again though, the government didn’t need the extraordinary powers provided by the Emergencies Act to remove the protesters.

The protesters had proven themselves surprisingly reasonable when approached. The mayor of Ottawa even negotiated to move some of them out of residential areas despite his clear opposition to them in general. All it took was some respectful dialogue with them—something the Trudeau government never even entertained, much less attempted.

There was no indication of intent or an ability to carry out an insurrection, though some claimed this is what justified the suspension of civil rights through the Emergencies Act. Neither heated tweets from anonymous people calling for the resignation of the prime minister, nor naive calls for intervention on the part of the Governor General, constitute any sort of budding revolution that needs to be quelled.

Prime Minister Trudeau strong-armed parliamentary support for the invocation of the Emergencies Act through vitriolic, hyperbolic statements and threats of calling an election if he didn’t get his way. If indeed the safety of the nation was at risk, he could have made the case for that in the House of Commons without threatening to turn the vote on the act into a confidence motion.

While Trudeau managed to bully his act through the House of Commons, it became quickly evident that it might not make it through the Senate. Even Liberal-appointed senators were questioning the need to bring in such heavy action against peaceful Canadians.

Rather than face a humiliating defeat in the Senate, Trudeau took the slightly less humiliating approach and repealed the act less than 48 hours after it passed in the House. Trudeau’s credibility was in tatters, along with NDP leader Jagmeet Singh’s.

The question that killed the full invocation of the Emergencies Act was simple: Where is the emergency?

While the act is gone, we still need to be asking that question as the damage from it is still ongoing. Many Canadians still have their bank accounts seized for daring to have contributed to a peaceful protest, trucking companies have been driven out of business, and protest organizers languish in jail without bail. All for an emergency that never was.

The Trudeau government surely wants to quickly turn the page on this embarrassing chapter of Canadian history. Their hopes will likely be dashed as legal challenges make their way to the courts and parliamentarians ask questions.

We have only seen civil rights suspended for emergencies four times in Canadian history. It was done in World War I, World War II, and during the October Crisis in 1970. The fourth time was for an emergency that never happened and that Trudeau can’t even define.

History will not look kindly on Justin Trudeau’s tenure as Prime Minister of Canada.