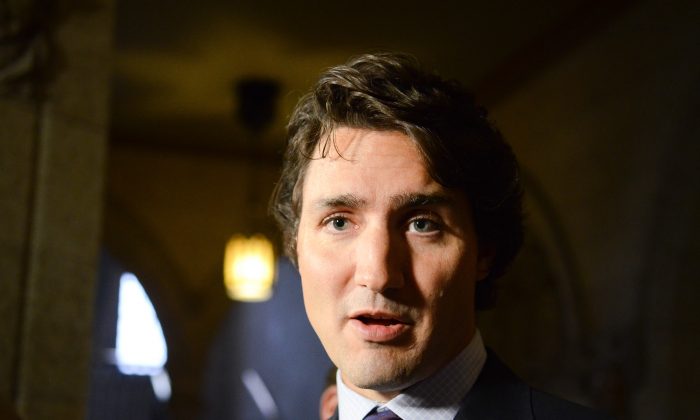 Liberal leader Justin Trudeau has said he admires China’s dictatorship, but he has yet to share more detailed thoughts on the regime. (Matthew Little/Epoch Times)
Canada

OTTAWA—Liberal leader Justin Trudeau has managed a rare feat for a Canadian political leader—he has acknowledged that China is ruled by a dictatorship.

Trudeau has been making headlines since last Thursday when he told a women-only event in Vancouver that he admired China’s administration “because their basic dictatorship is allowing them to actually turn their economy around on a dime and say ‘we need to go green fastest, we need to start investing in solar.’”

Trudeau hasn’t explained exactly how he views China’s dictatorship. It could be that the Liberal leader is indifferent to the regime’s bloodiest atrocities—which amount to some of the most egregious human rights abuses in history—but that seems unlikely.

It’s more likely that Trudeau really has no concept of what it means to live under communist rule, says prominent Chinese democracy activist Sheng Xue.

Xue wants to talk to Trudeau and hear about his “fantasy of the Chinese dictatorship.”

“Every one of us is the victim of the Chinese dictatorship,” she said at an event on the weekend with the members of the Coalition for Human Rights in China.

With her were representatives from a number of Chinese communities including Taiwanese, Tibetans, Falun Gong adherents, and democracy activists. They wanted to tell Trudeau their real-life experiences of imprisonment and torture.

Like Falun Gong adherent He Lizhi. He was a respected civil engineer who was tortured and imprisoned for over three years in China for mailing letters to his colleagues to counter propaganda that demonized the meditation practice.

“I was on the verge of death, coughing blood,” he recounted.
“This is what a communist dictatorship means to me, and millions of prisoners of conscience,” he said.

Xue came to Canada soon after the Tiananmen Square massacre, an event censored to non-existence in China.

She said many western politicians are deluded by trips to China where they are taken on guided tours and treated like royalty. She said Trudeau’s comments can’t be ignored.

“An important Canadian politician has this kind of admiration of China’s basic dictatorship. We all know that China’s soft power has landed in Canada already,” she said.

It’s a question that warrants scrutiny given the amount of resources the Chinese regime puts to the pursuit of soft power and political warfare.

Those resources were recently documented in detail by the Project 2049 Institute, a U.S.-based think-tank focused on guiding decision makers towards a more secure Asia by mid-century.

“Political warfare is a critical component of Chinese security strategy and foreign policy,” begins the report.

Its aim is to influence the emotions, objective reasoning and behaviour of foreign governments and others so they act according to the regime’s political-military objectives.

While much of that effort is focused on Chinese citizens or Taiwan, the regime does extend its efforts overseas. When an MP gets an angry call from the Chinese embassy for supporting Uyghur dissidents, that is political warfare. So too, depending on various definitions of the term, are China-sponsored Confucius Institutes at universities across Canada that give the regime’s sanctioned version of higher education.

The export of English-language Chinese state-controlled media like Xinhua, China Daily, and CCTV can also be seen as another platform to carry out political warfare.

Political warfare often uses coercive persuasion to weaken an opponent’s political will—for example, a scathing rebuke for a world leader who dares to meet with the Dalai Lama.

The China Energy Fund Committee (CEFC) is one platform for political warfare known to be active in Canada, says the report. The CEFC describes itself as a “non-profit, non-governmental think-tank devoted to public diplomacy and research on strategic issues with emphasis on energy and culture.”

In truth, it is an administrative subsidiary of the China Huaxin Energy Company, and “has a distinct energy, maritime security, and cultural propaganda mission,” reads the report.

That’s an important mission in a country like Canada, where Chinese state-owned oil companies have made significant investments and have faced a public backlash.

While Canadians are often vocal and forthright in their opinions on China’s current political system, the same is less true in political circles. Canada will speak boldly about common abuses in North Korea, Syria, and dozens of other countries, but is more careful criticizing China.

That fact stood out last Friday when the government slammed Trudeau for his remarks.

That trend held for other Conservative MPs like Ed Komarnicki who asked Multiculturalism Minister of State Tim Uppal a question that included this statement:

“The leader of the Liberal Party believes that dictatorships, countries without freedom, human rights, or basic rule of law, are nations to uphold and celebrate.”

Uppal responded that “having met so many Canadians who have faced persecution abroad, I assure them that we will always stand up to promote and defend the values Canadians cherish, including democracy and freedom, not dictatorships.”

Those remarks would represent the sharpest criticisms the Canadian government has ever levelled at China’s political system—had they mentioned China.

But they do reveal that the government understands clearly that China is under authoritarian rule, and lacks the basic rights Canada was founded upon and upholds as universal values.

That may explain why Canada remains among the most vocal and consistent advocates for human rights in that country.

Many African countries suggested China continue making investments and giving aid to their countries, a call that reflected one aspect of the Chinese regime’s effort to steer international opinion.

In some ways, Trudeau’s comments are hereditary.

His father, former Prime Minister Pierre Trudeau was a noted friend of the Chinese Communist Party, and of the communist regimes in Cuba and the Soviet Union. The elder Trudeau even took a guided tour through China in 1960 and co-authored a book about his experience that deepened those ties.

At the time, China was in the grips of a man-made famine that claimed tens of millions of lives as Chairman Mao forced farmers to create iron while confiscating meagre crops.

Although the younger Trudeau has not commented in detail on such matters, he will likely have to when he returns to Parliament next week and faces the scrum of reporters that typically await him after question period.