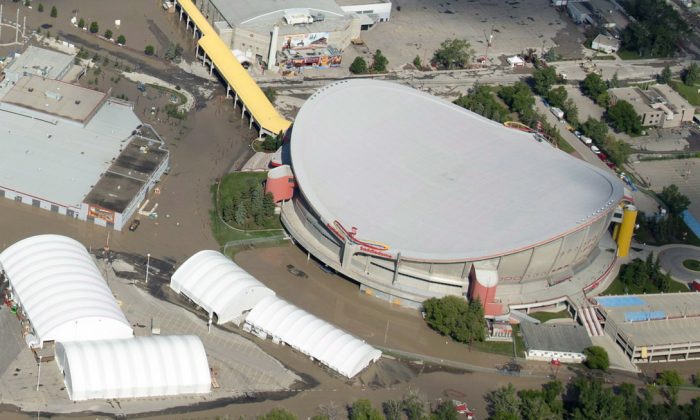 OTTAWA—Federal political leaders will be doing more than whooping it up when they make their annual pilgrimage to the Calgary Stampede next week.

Liberal Leader Justin Trudeau says he intends to roll up his sleeves and help with the cleanup after last week’s devastating flooding, which submerged the Stampede grounds and much of the downtown core.

Stampede officials have vowed that the “greatest outdoor show on earth” will start as scheduled on July 5, “come hell or high water.”

Trudeau says the Stampede is a point of pride, not just for Albertans but for all Canadians. And he says it’s essential to demonstrate that Calgarians can deal with adversity and come back stronger.

Prime Minister Stephen Harper, who represents a Calgary riding, toured the damage in his hometown and surrounding area last week and is expected to be back for the Stampede.

Meanwhile, the mayor of flood-ravaged High River, where residents are anxiously waiting for word of when they may be able to return, says officials are close to announcing a timeline for allowing people to at least check on their homes.

“I can’t tell you how badly I want to have everybody back in High River,” said Mayor Emile Blokland. “But we have to make sure the community is safe before we let them return to the town.”

Dave Galea of Alberta Emergency Management said Wednesday that a mandatory evacuation for the town of 13,000 remained in effect.

“The leadership of the town has to provide a safe environment for their citizens and that’s the No. 1 priority,” he said at a briefing in Edmonton. “That’s what’s happening now.”

He said a search of all buildings in the town to ensure nobody was trapped had been completed. Officials were testing the safety of roads and bridges. Only after that would crews begin to restore town services.

About 300 people ignored the mandatory order to leave High River and many who did go have been pressing to be allowed to return. However, Blokland said Tuesday that the town simply isn’t ready yet.

“It is not safe to be in our community.”

Some have threatened to go to court, but Blokland said he was too busy trying to get the town back on its feet to pay attention to that.

Campers Warned to Stay Away

While hundreds of people in High River, Medicine Hat, Calgary and other communities are trying to get back in, campers making plans for the upcoming long weekend are being warned to stay out.

“It’s important for people to check and make sure that the campgrounds that they intend to go to are still open,” he said. “Many have been closed as a result of the flooding situation.”

He also urged backcountry enthusiasts to heed posted closures.
“People should obey the closing signs. When a park is closed, it’s closed for reasons of safety.”

Galea pointed out that in Kananaskis Country, a popular recreational area west of Calgary, more than 1,200 campers had to be moved after flooding began last week.

He also issued a stern warning to boaters tempted by flood-swollen rivers.

“They put their lives at risk for the thrill of being on fast water,” he said.

A list of which campgrounds are closed and which are open is on the government of Alberta’s website.