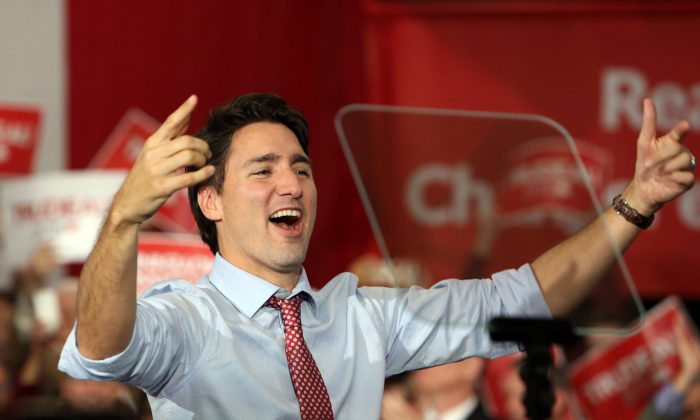 A jubilant prime minister-designate Justin Trudeau addresses supporters at a welcome rally in Ottawa on Oct. 21, 2015, the day after winning the federal election. (The Canadian Press/Fred Chartrand)
Canada

For prime minister-designate Justin Trudeau, winning the election may have been the easy part. Now he must fulfill the high expectations he raised, including a pledge to open up government—something that runs counter to one of his father’s lasting legacies.

For the younger Trudeau, it will be a major test of his character and tenacity. It will mean going against his own self-interest as prime minister to give up some of the decision making power that previous prime ministers have concentrated in the Prime Minister’s Office (PMO).

Former prime minister Pierre Trudeau made notable contributions to that trend by centralizing decision-making in his office and in central agencies like the Privy Council Office and Treasury Board.

Subsequent prime ministers furthered that trend. Prime Minister Jean Chretien’s pledge to vote on the Kyoto Protocal in 2002 was seen as a watershed moment because Chretien had not consulted his own cabinet on the decision to involve Canada in the international agreement.

The changes made under Harper were largely to do with message control and the relationship with the Parliament Hill Press Gallery. While in many ways these changes more superficial than previous centralization moves, they were particularly visible and criticized by the parliamentary press.

Centralization can make government more efficient and gives prime ministers the ability to carry out their mandate. But for those that disagree with that mandate, the trend gives one person, the PM, too much control. This became a major election issue that Harper’s critics capitalized on.

Trudeau promised to be the antidote.

Both before and during his campaign he pledged transparency and openness.

He also pledged to revoke restrictions on government scientists who were prohibited from speaking about their work to the media.

And, in a notable shift from the bitter partisanship of previous parliaments, Trudeau says he will not just work with the 184 MPs in his own caucus, but also with the 154 opposition MPs.

“I am committed, as I have been for a long time, to leading a government that focuses on bringing Canadians together and actually listening and respecting the 337 other voices that are in the House of Commons that were chosen by Canadians yesterday,” Trudeau told Parliamentary reporters in Ottawa Tuesday, Oct. 20.

That press conference finished with another pledge—to actually take questions from reporters.

Harper had a difficult relationship with the Parliament Hill Press Gallery and granted few interviews, something reporters often lamented.

Trudeau has made a point of saying he will change the relationship with the press and once silenced hecklers within his own ranks who took offence to a question he was asked by a CTV correspondent during the campaign.

“Hey! We have respect for journalists in this country,” he told supporters standing next to him. “They ask tough questions and they’re supposed to, OK?”

A Price to Pay

But there’s a cost to Trudeau to dismantling the apparatus his predecessors built. A majority government in Canada has a certain efficiency and functions as a kind of benign dictatorship, though one that is kept in check by the courts, a free press, and numerous watchdogs.

“With only modest hyperbole we can describe it as one-man government. This is where we are after 40 years of centralization of power—hyper-centralization of power,” Dan Gardner, editor of Policy Options, told the audience of a Public Policy Forum panel discussion in Ottawa on Wednesday, Oct. 21.

Stepping into that kind of power can be seductive, illustrated Gardner, by quoting Stephen Harper circa 1997.

“Only in politics do we still entrust power to a single faction expected to prevail every time over the opposition by sheer force of numbers. Even more anachronistically, we persist in structuring the governing team like a military regiment under a single commander with almost total power to appoint, discipline, and expel subordinates,” Harper wrote at the time.

The fact that Harper would come to lead a system he was so critical of speaks to the challenge Trudeau will face.

There are obvious reasons that Trudeau would not unravel centralization, noted Gardner, chief among them expediency and an ability to execute a vision that centralization allows.

But there are also costs. Among them is the fact that centralized control means it is easy to make bad decisions. Getting advice and listening to others means better information.

But despite a long list of previous prime ministers who have pledged similar reforms, Gardner is among those who believe, in this case, it could actually happen.

Liberal statements promising these changes have been bold, constant, and unequivocal. So far, Trudeau has lived up to his pledge by letting his senators run free and by being open and accessible throughout his campaign.

But sincerity only goes so far. Personality is also a factor. Harper was more inclined toward introverted methods than the relatively outgoing Trudeau, who seems more interested in what others think, said Gardner.

Harper, as Gardner and others have noted, also had a relatively inexperienced cabinet, many of whom were new to the political arena, which made tighter messaging more important.

“He has the good fortune of having some candidates who are used to running companies, who are very senior people, who are not the type who will be talking heads for pre-scripted messages,” said Landry in a telephone interview.

Trudeau’s caucus also includes 13 MPs with the “Honourable” prefix, the calling card of those who have previously served as cabinet ministers.

The bigger challenge for Trudeau in that regard will be keeping his campaign pledge to shrink his cabinet to around 25 ministers.

But if Trudeau has any challenges figuring out where to let go of power and where to keep it, he has a team of experienced political operatives who just helped him pull off a nearly flawless campaign.

“There are a lot of experienced people coming in who know the balance they are going to need to find,” said Landry.

Finally, Trudeau has little choice but to make major changes.

“He was elected on not being Stephen Harper,” said Landry.

The Liberals know that if they don’t deliver that to some extent before the next election, they will be in trouble.

If Trudeau does not follow through, he also risks disillusioning the people he has brought in to work with him—capable people looking to bring their own visions to fruition.

There are, however, reasons to doubt. Chief among them is that Trudeau could create the perception of change without actually delivering.

Simply rolling back Harper’s tight message control would give the appearance of more open government without ever addressing the central power of the PMO.

Second, Trudeau is far more comfortable in front of the camera. Harper’s cool demeanour was partly to blame for voter perception and Trudeau could use charisma and face time with the media and voters to substitute for real transparency.

In addition, unravelling the system he has inherited will be hard.

“It is easy to institute procedures, it is hard to take them away again. So I think it is going to be easier said than done,” said Landry.

There is also the question of how Trudeau understands the issue of open, collaborative government.

His father had an admiration for Chinese Communist Party founder Mao Zedong, a man responsible for tens of millions of deaths in China and one of the most repressive regimes in human history.

Trudeau seems to think that China today benefited from that system, noting at an event in November 2013 that he admired China’s “basic dictatorship” for its ability to “turn their economy around on a dime.”

While it is likely Trudeau has since gained a fuller picture of the deep structural problems of the Chinese economy and the often brutal repression faced by the Chinese people, he has never disavowed the statement.

Finally, there are the problems that collaborative open governments must deal with: criticism over seemingly excessive spending; quotes taken out of context and used unfairly by the opposition; and the extra time it takes to consult and collaborate before actually making a decision.

Fortunately, as Gardner and many others have noted, collaborative decisions are almost always better decisions.

And if Trudeau is going to fulfill the high expectations he raised, he’s going to need to make many good decisions.