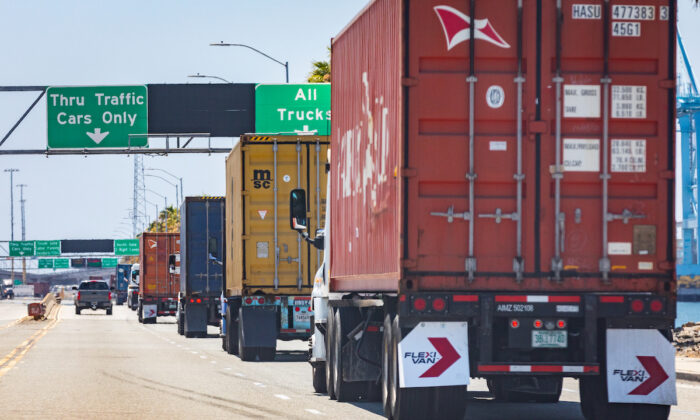 Truckers at the Port of Los Angeles are facing some uncertainties due to new California policies including a set of clean air regulations and AB 5, the “gig worker law.”

It will require trucks serving the ports or railyards to have 2010—or newer—engine models to enter.

The impact of the new policies on port operations could be profound, according to Matt Schrap, CEO of the Harbor Trucking Association.

“Suffice it to say, removing a quarter of the capacity from the system could have profound impacts on our ability to get business done and move those boxes up the dock,” Schrap said during a press briefing with the Port of Los Angeles on Aug. 17.

More clean air rules will take effect after next year and could further impact trucking operations at the port.

Under CARB regulations, drayage trucks will need to start transitioning to zero-emission technology beginning in 2024, and all trucks operating at the ports should be zero-emission by 2035.

Currently, only about 34 trucks—out of the 21,000—operating at the port are zero-emission electric vehicles.

A lack of charging stations for electric trucks in the state, however, is causing concern among carriers, he said.

“We do not see a robust infrastructure rollout happening by that date and so many members, as well as larger motor carriers throughout the country who do business here in California, are concerned about this,” he said.

Trucking companies will also be hit with the high cost of new electric or hydrogen trucks—each with a steep price tag of about $500,000.

The electric trucks also have a limited mileage range—only reaching about 200 miles—before they need to be recharged, causing “range anxiety” for truckers who drive to the Inland Empire.

“There’s a lot of concern that folks will be running out of juice prior to getting back to their home base,” he said.

The industry is also unsure how Assembly Bill (AB) 5, a new law that took effect last month, could impact trucking operations at the ports.

AB 5 requires independent contractors to be classified as full-time employees by the companies that hire them. About 70,000 independent truck owner-operators will be affected by the new classification, Schrap estimated.

“The impact actually is right now unknown. It can’t be helpful, though,” he said.

On June 30, the U.S. Supreme Court declined to hear a challenge on AB 5 by the California Trucking Association. The refusal allowed the law to move forward, sparking protests across the state.

Supporters of the law—including some workers who are union members—said it can ensure workers receive fair wages and other benefits, such as health insurance. Opponents argued that the change might be unaffordable for smaller companies and can lead to many contractors or freelancers losing their jobs.

Many trucking companies, especially out-of-state ones, have stopped doing business in California as a result of recent regulations. Other fleets are looking to relocate to trucker-friendly states like Texas. Some carriers are also likely to leave for other industries, Schrap said.

Port officials will continue to provide truckers the services they need to get the job done, according to Gene Seroka, the port’s executive director.

“We’ll be watching [AB 5] closely and working hand-in-hand with Matt [Schrap], California Trucking Association, and so many others to make sure the cargo flow is not impacted,” Seroka said.

The busy twin Southern California ports at Los Angeles and Long Beach have struggled to keep up with a deluge of cargo from Asia in the past year and continued to process record amounts of cargo last month.

The port processed 935,345 containers in July, a 2.5 percent increase from a record for that month set in 2019. This was 8 percent higher than the port’s five-year July average, according to officials.

Most of the delayed cargo—about one-third—was waiting to be loaded on railways, according to Seroka.