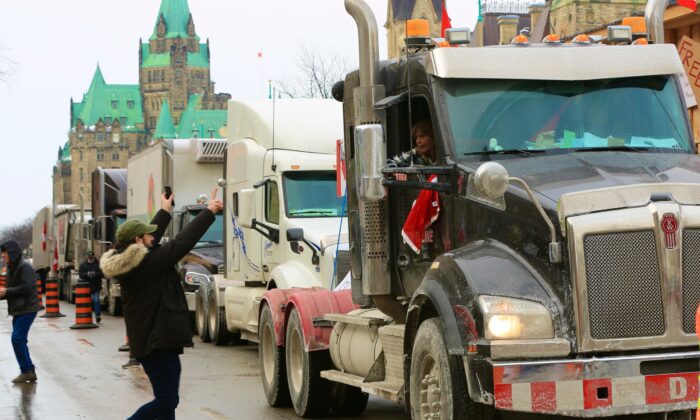 Trucker Protest: Organizers Say Governments Have Yet to Reach Out

With the “Freedom Convoy” protest in Ottawa soon completing its first week, organizers said today no level of government has yet spoken to them directly, while Prime Minister Justin Trudeau wouldn’t confirm if he was considering opening such negotiations but says he remains “steadfast” in his vaccination mandate approach.

“So far, no one from the federal, provincial, or municipal government has spoken directly with us. Instead, they’re using you, the media, to portray us as racist, misogynist, and even terrorists,” said protest organizer Tamara Lich in a press conference on Feb. 3.

“As a woman with Métis heritage, a mother and a grandmother, I am offended. The reality is that members of this freedom movement are average peace-loving and law-abiding citizens from all walks of life, who are fed up with being disrespected and bullied by our government.”

Lich reiterated the protesters would not leave until they see a “clear plan” for the lifting of all pandemic restrictions and mandates, pointing to other regions that have recently made announcements to do so such as Saskatchewan, the U.K., and several countries in Europe.

Earlier in the day, Prime Minister Justin Trudeau was asked during a press conference if he would consider negotiating with the protesters. Trudeau did not reply directly but said he was following his election promise by imposing mandatory COVID-19 vaccination.

“That is the decision Canadians took in the last election by voting for parties that were supporting those mandates,” Trudeau said.

“So having a group of people who disagree with the outcome of an election, who want to go a different way and bring in an alternative government, is a non-starter in a responsible democracy.”

A survey by Angus Reid released on Jan. 31 said that a slim majority (54 percent) of Canadians are in favour of ending the pandemic restrictions—an increase of nearly 15 percentage points from the results of a similar poll conducted in January two weeks earlier, which showed 40 percent in favour.

In light of comments the day prior from Ottawa Police Chief Peter Sloly that requesting military aid was an option in dealing with the protest, Trudeau was asked if military intervention was in fact being considered.

“One has to be very, very cautious before deploying military in situations engaging Canadians,” Trudeau answered.

“It is not something that anyone should enter in lightly. But as of now, there have been no requests and that is not in the cards right now.”

The Prime Minister added that police forces should “do their job to resolve this situation,” and said the federal government was providing help with the RCMP and intelligence services.

Keith Wilson, a lawyer from the Justice Centre for Constitutional Freedoms (JCCF) representing the organizers, addressed the issue of GoFundMe withholding millions of dollars collected by the “Freedom Convoy” during the press conference.

Wilson said the Freedom Convoy has taken steps to incorporate as a not-for-profit corporation and all banking and accounting arrangements have been made to ensure the funds are released.

“GoFundMe, because they were bombarded with an orchestrated social media and other campaigns to try and shut it down or take it, has exercised heightened due diligence, which we welcome,” said Wilson, whose outfit the JCCF announced today it has a team of lawyers on the ground to advise the organizers.

Arrests Made Not Part of Convoy: Security Coordinator

A former RCMP officer who worked as a sniper to protect the prime minister also spoke at the press conference to discuss the matter of security.

Daniel Bulford, a 15-year veteran of the force who says he resigned because of the vaccine mandate imposed on the RCMP, is coordinating security for the protest.

Bulford said he has extensive experience with large events in downtown Ottawa, such as Canada Day, and said people should be reassured that the extensive police deployment in place during the trucker protest is normal.

The former officer also said organizers have been communicating with the various law enforcement agencies involved to relay safety concerns.

Bulford also called into question the information regarding arrests that have been portrayed as related to the protest.

“I have it on very reliable information that people from the movement were not associated, and that offences related to property damage, and just an assault this morning, committed by agitators were witnessed and reported by a trucker and one of our volunteer security personnel, which was reported to the police and handled by the Ottawa Police Service,” he said.

Bulford went on to mention the acts of kindness and civility seen around the protest site, such as providing food to the homeless, picking trash off the ground, shovelling snow, and guarding the War Memorial.