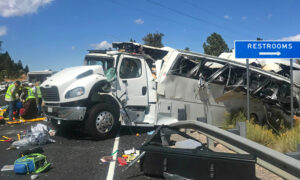 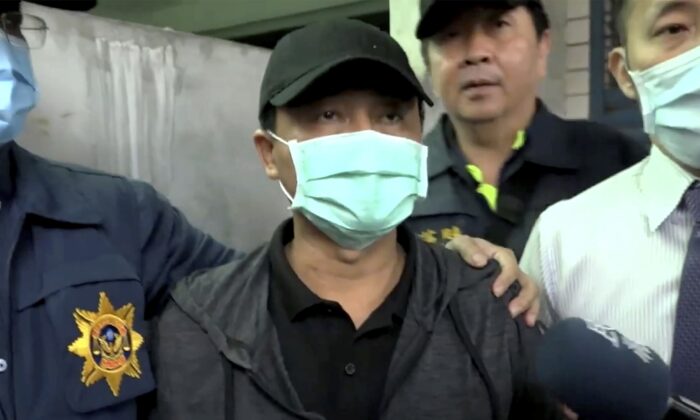 In this image taken from video, Lee Yi-hsiang, the driver of the truck that caused the train accident on Saturday, offers a public apology as he is led by police, in Hualien, Taiwan, on April 4, 2021. (EBC via AP)
Asia & Pacific

The manager of a construction site whose truck slid onto rail tracks causing a catastrophic train crash in Taiwan apologized in tears while being led away from his home by police on Sunday. The unmanned truck’s emergency brake was not properly engaged, according to the government’s disaster relief center.

The transport minister has offered to resign, but his offer was rejected for now.

In the island’s worst rail accident in seven decades, 48 people have been confirmed dead after a packed express train carrying almost 500 passengers and crew slammed into a truck near the eastern city of Hualien on Friday, causing it to derail and the front part to crumple.

The death toll was revised down to 48 on Sunday, after rescuers initially said 51, then 50 people were killed. The changes came after some body parts were found to belong to one individual, a spokesperson for the Central Emergency Operation Center said. At least 198 people were injured.

The truck that the train hit had slid down a sloping road onto the track just outside a tunnel. Officials are investigating the manager of the construction site, Lee Yi-hsiang, whose truck is suspected of not having its brakes properly applied.

Lee had been released on bail, though the high court’s Hualien branch on Sunday rescinded that decision after the prosecutors appealed it, sending the case back to the lower court.

Lee read out a statement apologizing for what happened as police took him away from his residence, Taiwan media reported.

“I deeply regret this and express my deepest apologies,” he said. “I will definitely cooperate with the prosecutors and police in the investigation, accept the responsibility that should be borne, and never shirk it. Finally, I once again express my sincerest apologies.”

A Hualien court said on Sunday evening it had ordered that Lee be detained for two months, saying there was a risk he may destroy evidence. After questioning by the judge and evidence from prosecutors, he is suspected of causing death by negligence, it said.

His lawyer told reporters that Lee wanted to face up to what had happened and was apologetic and expressed regret.

Speaking earlier in the day at the crash site overlooking the ocean and backed by precipitous mountains, Transport Minister Lin Chia-lung said he too would “not avoid” responsibility.

“I am also in charge of minimizing the damage caused by the entire accident. After the whole rescue work is completed, I believe I will take the responsibility,” he said.

Premier Su Tseng-chang’s office said Lin had made a verbal offer to resign on Saturday, but Su had rejected it for the time being, saying efforts for now should focus on rescue and recovery.

Workers are continuing to remove the train from inside the tunnel and look for other bodies.

The Transport Ministry and the rail administration that comes under it are facing a number of questions, including why there was no proper fencing at the site and whether too many standing-only tickets were sold for the train journey.

Deputy transport minister Wang Kwo-tsai said late on Saturday the railway administration needed to take a hard look at all these issues.

The railway administration is also without a permanent director after its former chief retired in January. The position is being filled in an acting capacity by another deputy transport minister, Chi Wen-chung.

Wang said Lin was working hard to find the right person to fill the job.

The uncle of the youngest confirmed victim, a 5-year-old girl, tearfully told reporters he was still waiting for an apology for the accident. “I’m so angry,” he said.

The government has promised compensation and said it will do everything it can to help survivors and their relatives, including coordinating public donations.

The damaged section of the track will not reopen until April 20 at the earliest, Wang said, though rail traffic continues on a parallel track that runs through another tunnel and was not affected by the accident.

The accident occurred at the start of a long weekend for the traditional Tomb Sweeping Day, when people return home to tend to family graves.

Survivors have described terrible scenes inside the wreck.

“She could not find her daughter. When she yelled, she found her daughter was under the steel panels. She put her effort to move those pieces one by one, but her daughter’s voice became quieter and quieter, and then there was no response,” he said.

By Ann Wang and Damon Lin