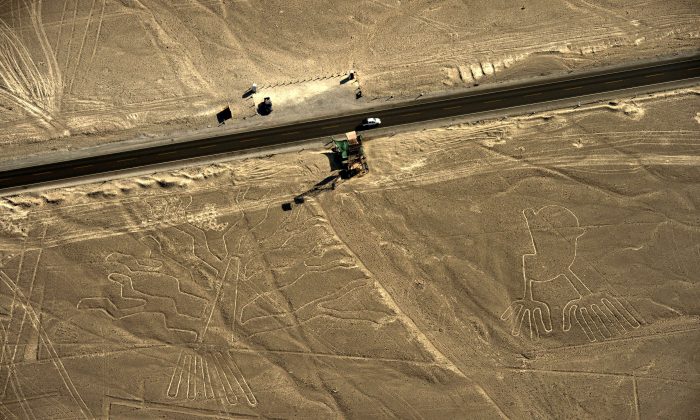 According to NPR, the driver of the semitrailer was identified as 40-year-old Jainer Jesús Flores Vigo. He was detained and later released.

Charges against the driver are being pursued after he caused significant damage to the UNESCO World Heritage site.

Vigo drove off the paved road in an attempt to avoid paying a toll, despite the many warnings of the heritage site placed on both sides of the road, according to newspaper Clarín.

The famous lines, known as geoglyphs (drawings on the ground made by removing rocks and earth) have stayed mostly intact for nearly 2,000 years. Due to the low amount of rain and wind, the site has been preserved relatively well.

According to the National Geographic, scientists believe most of the lines were created by the Nasca people, who were living from around A.D. 1 to 700. The lines depict various objects ranging from animals, birds, and wildlife.

The Culture Ministry said the trailer left “deep scars” across an area 164 feet by 328 feet, NPR reported. It damaged the surface of the ancient site and also damaged three of the geoglyphs.

The driver was let free because there was not sufficient evidence to show that the driver acted with intent, according to newspaper Peru21.

The ministry seeks 9 months of preventive detention and a $1,550 fine for the driver, while the investigation continues.

The driver had never traveled to the area before, according to Clarin.

UNESCO said on their official website that the Nazca site is “the most outstanding group of geoglyphs anywhere in the world and are unmatched in its extent, magnitude, quantity, size, diversity and ancient tradition to any similar work in the world.”