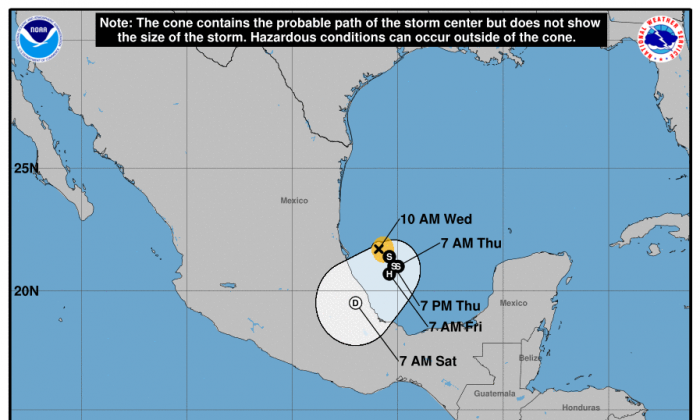 Update: Katia is now a Category 1 Hurricane, according to the National Hurricane Center’s latest advisory at 5 p.m. ET.

Tropical Storm Katia formed in the Gulf of Mexico, and it may pose a threat to the eastern portion of Mexico.

Katia is expected to strengthen into a hurricane before making landfall in Mexico. It’s about 135 miles east of Tampico and some 175 miles Veracruz, the National Hurricane Center (NHC) said on Wednesday morning, Sept. 6.

It has winds of up to 45 mph, and it is moving east-southeast at 5 mph.

“There are no coastal watches or warnings in effect,” the NHC said, but stipulated, “a hurricane watch could be required for portions of the Mexican state of Veracruz later today.”

The center said that Katia is expected to stay offshore until Friday morning.

According to the NHC, here is the 48-hour outlook on Katia:

At 1000 a.m. CDT (1500 UTC), the center of Tropical Storm Katia was located near latitude 21.7 North, longitude 95.9 West. Katia is moving slowly toward the east-southeast near 5 mph, and little motion is expected during the next day or so.

Maximum sustained winds are near 45 mph with higher gusts. Strengthening is forecast and Katia could become a hurricane before it approaches the coast of Veracruz in a couple of days. An Air Force reconnaissance plane will check Katia later today.

Tropical-storm-force winds extend outward up to 45 miles from the center. The estimated minimum central pressure is 1004 mb (29.65 inches).

Katia is expected to produce total rain accumulations of 5 to 10 inches over northern Veracruz, and 2 to 5 inches over far southern Tamaulipas, northeast Puebla, and southern Veracruz through Saturday morning. Isolated maximum amounts of 15 inches are possible in northern Veracruz. This rainfall may cause life-threatening flash floods and mudslides, especially in areas of mountainous terrain.

The U.S. National Hurricane Center (NHC) in Miami forecast the storm would make landfall in Florida on Saturday, although Irma’s precise trajectory is yet to be determined.

Forecasters described the storm as “potentially catastrophic.” Irma ranks as one of the five most powerful Atlantic hurricanes during the past 80 years and is the strongest Atlantic storm ever recorded outside the Caribbean Sea and Gulf of Mexico, the NHC said.