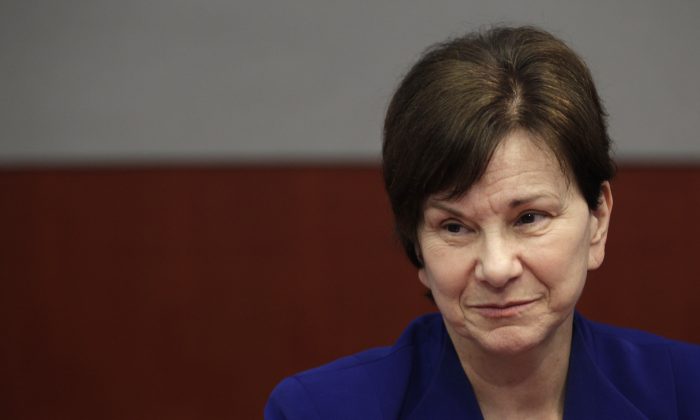 Janet Woodcock, Director of the Center for Drug Evaluation and Research at FDA, speaks during the Reuters Health Summit in New York, May 9, 2011. (Brendan McDermid/Reuters)
US News

BOSTON—A top U.S. Food and Drug Administration official testified on Nov. 19 that the agency has concerns about drugs made by compounding pharmacies and still sees problems with them six years after a fungal meningitis outbreak tied to a Massachusetts pharmacy killed 76 people.

Janet Woodcock, who heads the FDA’s pharmaceuticals division, testified in Boston federal court that she had never seen an outbreak like the one New England Compounding Center’s mold-tainted steroids caused in 2012.

Woodcock’s testimony came during the sixth week of a trial of six former NECC employees or executives indicted after the outbreak. Prosecutors say the defendants misled hospitals about the quality of NECC’s drugs and regulators about how it operated.

The six are Gregory Conigliaro, a co-owner; Sharon Carter, NECC’s former director of operations; and pharmacists Gene Svirskiy, Christopher Leary, Joseph Evanosky, and Alla Stepanets. They have pleaded not guilty.

Woodcock said that while the outbreak involving the now-defunct NECC was the worst she had ever seen involving drugs made by compounding pharmacies, there are still problems with such drugs.

“We still are seeing patient harm related to that now,” Woodcock testified.

The comment highlighted what authorities say are continuing lapses they have identified at compounding pharmacies.

According to the FDA, during more than 500 inspections of compounding pharmacies since the outbreak, it has often discovered unsanitary conditions featuring, among other things, dead insects and microbial growth.

According to the public interest non-profit Pew Charitable Trusts, 1,416 people from 2011 to 2017 suffered adverse events after taking compounded drugs that had potential or actual problems, such as contamination or over-potency. Of those, 115 died.

“I think we’ve come long way since NECC, but I think there’s a lot more that needs to be done to improve the quality of compounded drugs,” Julie Dohm, the FDA’s senior science advisor for compounding, told Reuters in October.

Traditionally, compounded medications were formulated by pharmacies to address an individual patient’s needs, like an allergy to an ingredient in an FDA-approved drug.

But by the time of the outbreak, some compounding pharmacies, traditionally state-regulated, had become large enterprises that shipped significant volumes of drugs for hospitals to keep in stock.

Those firms included NECC, whose owners and employees cut corners and made drugs in filthy conditions, prosecutors say.

Fourteen people tied to NECC were later indicted, including the six now on trial.

NECC co-founder Barry Cadden and ex-supervisory pharmacist Glenn Chin were convicted of racketeering and fraud in two earlier trials and are serving nine and eight years in prison, respectively.

Testifying on Nov. 19, Woodcock said the NECC was a drug manufacturer “masquerading” as a state-regulated pharmacy that filled prescriptions meant for specific patients.

Following the 2012 outbreak, Congress in 2013 passed a law that established “outsourcing facilities,” which can sell compounded products in bulk but must register with the FDA and follow federal manufacturing standards.