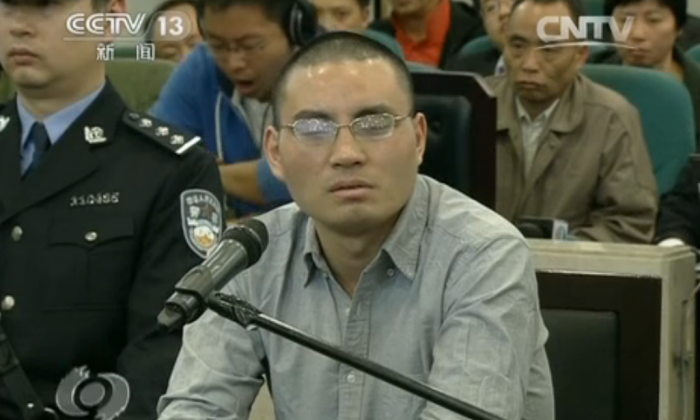 A microblogger who goes by the name of Qin Huohuo online plead guilty to all charges at trial on April 11, 2014, in Beijing. He was accused of using the Internet to spread rumors. (Screenshot/CCTV)
China

The first public trial in China that would use a unique interpretation of the law to criminalize “rumors” began Friday in Beijing. Microblogger Qin Zhihui was accused of using the Internet to spread rumors, and was indicted by the state prosecutor for “defamation” and “harming society.”

The case of 30-year-old Qin, known by the online moniker “Qin Huohuo,” came to public attention last August when he was put in criminal detention by Beijing police for posting what the authorities said was “untruthful information” on social media.

Plain old truthfulness may not be the ultimate priority of Chinese communist authorities in the matter, though: Observers said that the trial is primarily another sign of the authorities’ determination to rid the Internet of speech about official corruption and other social ills.

Though the Communist Party is currently waging a high-profile campaign against corruption, the focus of propaganda is always on individual officials. Allowing ordinary citizens to freely voice their opinions about the corruption of the entire system could quickly become problematic and inconvenient for the authorities.

“The authorities are actually abusing their power to reach the goal of purging and rectifying the Internet,” said Wen Yunchao, a Chinese media researcher based in the United States, and formerly a visiting scholar at Columbia University.

The arrest of Qin last year took place as the regime announced plans to “fundamentally eradicate Internet rumors,” signaling a crackdown on social media and a tightening of the space online in which Chinese can speak freely about society.

A rule announced then said that someone who posts “fake information” that is viewed over 5,000 times or reposted over 500 times could face criminal charges, depending on the social impact.

The public prosecutor in Qin’s case said that Qin had posted more than 3,000 online rumors that had attracted a lot of attention and negative remarks against the government, “which seriously harmed society.”

An example given was Qin’s comments on the Ministry of Railways (which was later disbanded because of corruption) on the topic of compensation to victims of a severe rear-end train collision that took place on July 23, 2011.

Qin wrote that the Chinese regime gave a large compensation of 200 million yuan ($32 million) to foreign passengers in the accident, which the authorities said is not true. More than 12,000 netizens reposted this information within an hour, many tacking on a few words of their own resentment toward authorities.

A number of Qin’s other posts alleged corruption of well-known public figures. He charged, for example, that Yang Lan, a wealthy media entrepreneur, faked donations, and that Guo Meimei, a young lady who became famous for posting photographs as she posed alongside expensive sports cars, had used money embezzled from the Chinese Red Cross. Qin was in both cases said to have used “fake information” to damage the reputations of the two women.

But neither Yang Lan nor Guo Meimei joined a lawsuit against Qin. Instead, the procuratorate directly indicted him for “defamation” and “harming society.”

Whether what he wrote is true or false, the regime’s manner of handling it gave the unmistakable impression that a campaign to squelch free speech was afoot.

Chinese law says that “harming society” must consist of acts that are directly, rather than indirectly damaging, and that victims of defamation can only be natural persons, not governments.

“If Qin Huohuo lived in a democratic country, it’s obvious that he might face civil lawsuits, at the most, to give compensations and apologize,” Wen said. “But it would be impossible for a state judicial organization to prosecute someone like him.”

As in previous cases of prosecuting Internet users, Qin confessed his guilt. His apparent remorse and guilt was made a central focus on China Central Television and Xinhua, the state mouthpiece.

“It’s all my fault that I’m standing here today,” he said. “I hope my case can give others a warning not to do such stupid things as I’ve done,” he said in his court statement.

Qin also gave profuse thanks to society, the court, the police, lawyers, the media, his parents, and more. The compliant demeanor will likely serve to reduce his punishment. The sentence has not been handed down yet.

“Qin had no choice but to confess under such high pressure,” said Wen Yunchao. “The authorities also need Qin to have an attitude like that, to show the achievements of their Internet purge.”

Observers found it difficult not to draw an unwelcome contrast between Qin’s prosecution and the demonstrably false statements regularly made by the Chinese authorities themselves, none of which have yet been punished.

Internet user Yuyue Yunqi wrote: “Who’s going to put the Lanzhou government on trial for making rumors?” A recent news report showed that 20 times the regulated limit of Benzene, which causes cancer, has been found in the water in Lanzhou City, Gansu Province, after the local government announced that “the water meets state standards of safe drinking.”

Chinese authorities are known to conceal disease epidemics like bird flu, and play down the death tolls of natural or man-made disasters. No legal actions have been taken in those cases, netizens said.

Two widely forwarded complaints on the QQ microblog said: “The law only serves people with power,” and “The government can make rumors, but the people can’t.”