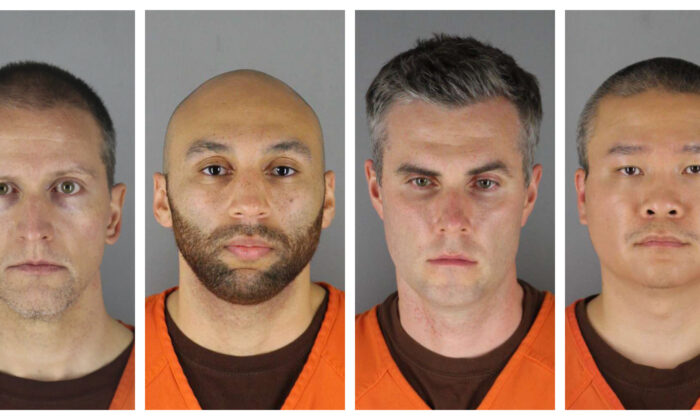 The trial of two former Minneapolis police officers charged for their role in the 2020 death of George Floyd will be delayed until January 2023, a Hennepin County judge ruled on Monday.

They were due to go on trial next week but judge Peter Cahill has ordered that court proceedings be delayed until Jan. 5 next year, citing a guilty plea by a third officer, Thomas Lane, last month.

In his ruling on Monday, Cahill cited publicity from Lane’s plea deal as well as the February convictions of Thao, Kueng, and Lane on federal charges of violating Floyd’s civil rights by not aiding him on the day that he was murdered by fellow officer Derek Chauvin.

“These two recent events and the publicity surrounding them are significant in [that] it could make it more difficult for jurors to presume Thao, 35, and Kueng, 28, innocent of the state charges,” Cahill wrote in his ruling.

The judge added that he was postponing the trial with the aim to “diminish the impact of this publicity on the defendants’ right and ability to receive a fair trial from an impartial and unbiased jury.”

Cahill on Monday also denied a request from defense attorneys for a change of venue in the ruling and denied a motion by a media coalition to reconsider allowing live streaming of the proceedings.

Cahill ruled in April that the court proceedings would not include live audiovisual coverage after the three officers charged in Floyd’s killing objected to this.

Minnesota’s court rules allow cameras to film during most of a trial only if all parties consent. But Cahill said he might reconsider his ruling if the Minnesota state court system revises its rules on cameras in the courts by Jan. 4.

Jury selection in the state trial for Thao and Kueng is now set to begin on Jan. 9, with questionnaires mailed to a new pool of “several hundred” potential jurors around Sept. 1. and opening statements on Jan. 30.

Minnesota Attorney General Keith Ellison, whose office is prosecuting the case, said in a statement following Monday’s decision: “It’s unfortunate for the victims, the witnesses, and community that the opportunity to seek justice has been delayed. The State was ready for trial next week and will be ready next January.”

Bob Paule, an attorney for Thao, said he thought the decision “was a thoughtful and well-reasoned decision by Judge Cahill.”

Floyd, a 46-year-old Black man, died after former officer Chauvin held his knee against Floyd’s neck and back for approximately nine-and-a-half minutes as Floyd laid handcuffed and face-down on the pavement while Lane restrained his lower body and Kueng knelt on Floyd’s back.

During the incident, which began after Floyd allegedly tried to use a counterfeit $20 bill to purchase cigarettes before being arrested by officers, Thao was standing nearby addressing crowds that had gathered near the scene.

He also pleaded guilty in federal court in December to violating Floyd’s civil rights. In a plea agreement, prosecutors are requesting that he get sentenced to 300 months, or 25 years, in prison to be served concurrently with his 22 and a half year sentence.