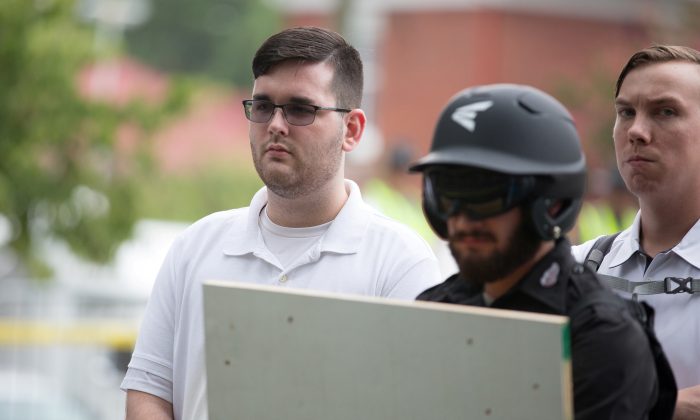 James Alex Fields Jr., (L) is seen attending the rally in Emancipation Park before being arrested by police in Charlottesville, Va., on Aug. 12, 2017. (Reuters/Eze Amos/File Photo)
Crime and Incidents

Trial Begins for Man Charged With Murder at Charlottesville Rally

CHARLOTTESVILLE—Jury selection began Nov. 26 in the trial of the man accused of killing a woman by driving his car into a crowd of counterprotesters after a rally in Charlottesville, Virginia, last year.

James Fields Jr., a 21-year-old Ohio resident, faces 10 criminal counts in Virginia, including first-degree murder and malicious assault. He has pleaded not guilty to the charges, which could send him to prison for the rest of his life.

Fields was among several hundreds of white nationalists, national socialists, and others who converged on the town, home of the University of Virginia, to protest plans to remove a statue of a Confederate war hero from a local park. Some of the rally goers engaged in fights with some of the large crowd of counterprotesters on scene, including Antifa and Black Lives Matter.

After the rally, Fields plowed his vehicle into counterprotesters, killing 32-year-old Heather Hayes and injuring dozens of others, prosecutors say.

One of his attorneys, John Hill, told prospective jurors that the defense would present testimony showing the defendant thought he was acting in self-defense. Hill also told them to expect medical and mental-health testimony.

Federal prosecutors have said Fields routinely promoted racial ideologies on his social media accounts and expressed support for Adolph Hitler and the Holocaust.

On Nov. 26, Fields appeared calm after entering a heavily guarded Charlottesville Circuit Courtroom wearing a dark suit, dark-rimmed glasses, and a light-colored tie. As jury selection began, he frequently turned toward the audience in the courtroom.

Circuit Court Judge Richard E. Moore said 12 jurors and four alternates would be chosen to hear the case, which could last until Dec. 13.

In June, the Department of Justice said it was also indicting Fields on 30 federal hate crimes charges, for which he could face the death penalty. Fields also pleaded not guilty to the federal charges.

On Nov. 26, Charlottesville Commonwealth’s Attorney Joseph Platania emphasized to prospective jurors that prosecutors were not seeking a death sentence on the state charges.

Jury selection is expected to continue Nov. 27, with opening arguments later this week.