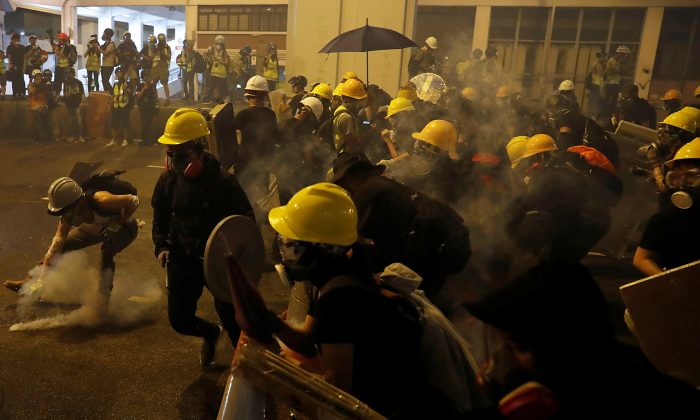 An anti-extradition bill protester picks up a tear gas canister during clashes with riot police after a march to call for democratic reforms, in Hong Kong, on July 21, 2019. (Tyrone Siu/Reuters)
Hong Kong

HONG KONG—Hong Kong police on July 22 defended their actions and the lack of arrests after opposition lawmakers said police had failed to protect a train full of anti-government protesters from a triad gangster attack from a day earlier.

The attack came in a night of violence that opened new fronts in Hong Kong’s widening political crisis over an extradition bill to send people to China for trial.

On Sunday night, men in white t-shirts, some armed with poles, flooded into the rural Yuen Long station and stormed a train, attacking passengers, according to footage taken by commuters and Democratic Party lawmaker Lam Cheuk-ting.

Eye-witnesses said they appeared to target black-shirted passengers who had been at an anti-government march and the attack came after several thousand activists surrounded China’s representative office in the city, later clashing with police.

Lam, who was injured in the attack, said he was angry about a slow police response after he alerted them to the trouble, government-funded broadcaster RTHK reported.

Lam said it took police more than an hour to arrive after he alerted them and they had failed to protect the public, allowing the triads to run rampant. The party is now investigating.

“Is Hong Kong now allowing triads to do what they want, beating up people on the street with weapons?,” he asked reporters.

One government worker, aged 22, described chaotic scenes as people ran in disarray off the train, despite word that gangsters were attacking people on the street as well.

“People started to run in all directions, just avoiding the gangsters,” he said.

Police said early on July 22 they had not made any arrests at the station or during a follow-up search of a nearby village but were still investigating.

#China‘s Communist Party came to power through violence and, as we can see below, maintains its rule by violence. When it falls, as it must, its end will undoubtedly be violent. #HongKong https://t.co/9H7XmUUBpT

Groups of men in white were seen by eye-witnesses with poles and bamboo staves at a nearby village but Yau said police saw no weapons when they arrived.

“We can’t say you have a problem because you are dressed in white and we have to arrest you. We will treat them fairly no matter which camp they are in,” Yau said.

Hong Kong’s anti-triad police units in 2014 investigated the role of triad gangs attacking protesters on the streets of Mong Kok during the “Occupy” pro-democracy demonstrations that shut down parts of the city for 79 days.

Police have yet to respond to Reuters’ questions whether they are specifically investigating triad involvement in Sunday’s violence.

Hong Kong has been rocked by a series of sometimes violent protests for more than two months in its most serious crisis since Britain handed the Asian financial hub back to Chinese rule in 1997.

Protesters are demanding the full withdrawal of a bill to allow people to be extradited to mainland China for trial, where the courts are controlled by the Communist Party, fearing it would undermine Hong Kong’s judicial independence.

They are also demanding independent inquiries into the use of police force against protesters.

On Sunday police fired rubber bullets and tear gas to disperse activists on the edge of Hong Kong’s glittering financial district after they had fled China’s Liaison Office, its main representative branch in the city.

Some police had been injured in the clashes after protesters hurled bricks, smoke grenades and petrol bombs, said a police statement.