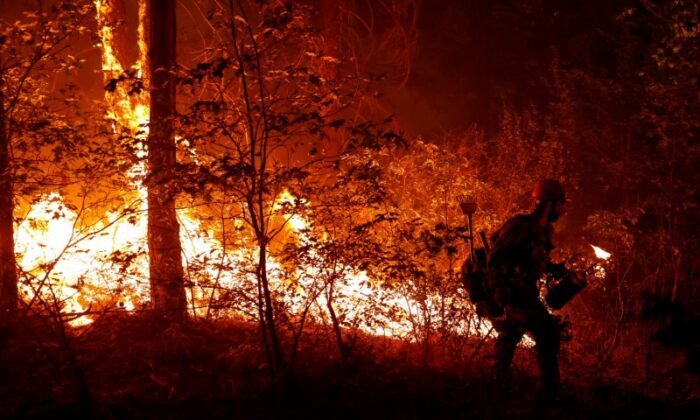 U.S. Forest Service firefighter Ben Foley lights backfires to slow the spread of the Dixie Fire, a wildfire near the town of Greenville, Calif., on Aug. 6, 2021. (Fred Greaves/Reuters)
Northern California

Officials in California on Tuesday said that wildfires that scorched across northern parts of the state last summer were caused when a tree fell on an electrical line owned by Pacific Gas and Electric Company (PG&E).

In a statement, the California Department of Forestry and Fire Protection, or Cal Fire, said that following a “meticulous and thorough investigation,” it had determined that “the Dixie Fire was caused by a tree contacting electrical distribution lines owned and operated by Pacific Gas and Electric (PG&E) located west of Cresta Dam.”

Last July’s wildfire, known as Dixie Fire, burned a total of 963,309 acres across the counties of Butte, Plumas, Lassen, Shasta, and Tehama, destroyed 1,329 structures, and damaged 95 additional structures, according to officials.

Cal Fire said it had forwarded its report to the District Attorney’s Office in Butte County, where the fire began.

The Dixie Fire started on July 13 last year in Feather River Canyon southeast of Lassen Volcanic National Park and forced thousands of people to flee their homes while strong winds and extreme drought conditions plagued the regions. Multiple firefighters were injured while battling the blaze but no civilians were injured.

In a statement on Tuesday, PG&E said the tree that struck the power line was “one of more than 8 million trees within strike distance to PG&E lines.”

“As we shared in our public statement in Chico in July after the start of the Dixie Fire, a large tree struck one of our normally operating lines,” the statement read. “Taking a bold step forward, PG&E has committed to burying 10,000 miles of lines in addition to the mitigations included in PG&E’s 2021 Wildfire Mitigation Plan.”

“Regardless of today’s finding, we will continue to be tenacious in our efforts to stop fire ignitions from our equipment and to ensure that everyone and everything is always safe,” the company said.

This is not the first time that equipment from utility company PG&E has been blamed for starting wildfires in California.

In 2020, PG&E pleaded guilty to 84 counts of involuntary manslaughter stemming from a devastating 2018 wildfire in Northern California known as Camp Fire that destroyed much of the town of Paradise.

At the time, PG&E said in a statement: “Our hearts are with the communities impacted by the Camp Fire. The loss of life and property is staggering. We are supporting communities and local agencies as they work to recover.”

Last year, the County of Sonoma, City of Santa Rosa, Town of Windsor, City of Cloverdale, and City of Healdsburg announced they had reached a collective $31 million settlement with PG&E for “public and natural resource injuries and damages “caused by the 2019 Kincade Fire, which started on Oct. 23, 2019.

PG&E also agreed to pay $125 million in fines and penalties under a settlement reached with the California Public Utilities Commission’s Safety and Enforcement Division over the Kincade Fire.

Earlier last year, PG&E emerged from Chapter 11 bankruptcy, which the company said marked “the beginning of PG&E’s next chapter—as a fundamentally improved company and the safe and reliable utility that its customers, communities and California deserve.”