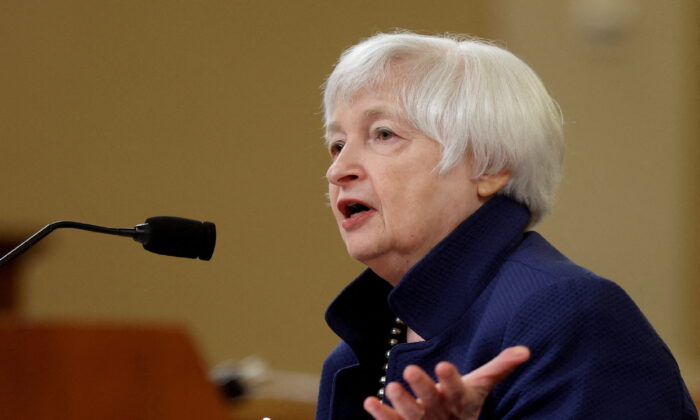 Treasury Secretary Janet Yellen on July 24 again downplayed concerns about a possible recession while conceding that an economic slowdown is occurring.

Yellen told NBC News the U.S. economy is in “a period of transition in which growth is slowing,” which is “necessary and appropriate.”

“We need to be growing at a steady and sustainable pace,” she said. “So there is a slowdown, and businesses can see that, and that’s appropriate, given that people now have jobs, and we have a strong labor market.

“The labor market is now extremely strong. … This is not an economy that’s in recession.

“But you don’t see any of the signs now. A recession is a broad-based contraction that affects many sectors of the economy. We just don’t have that.”

Yellen noted that many economists believe that a recession occurs when there are two consecutive quarters of negative gross domestic product (GDP). In the first quarter of 2022, U.S. GDP fell 1.4 percent, compared with the fourth quarter of 2021.

Many economists expect the United States to see negative growth for the second quarter, but Yellen said even if that does happen, it doesn’t necessarily mean there’s a recession.

“Even if that number is negative, we’re not in a recession now, and we should not be characterizing that as a recession,” she said. Her comment drew pushback from NBC’s Chuck Todd, who claimed she was splitting hairs over the definition of a recession.

The National Bureau of Economic Research (NBER) “looks at a broad range of data in deciding whether or not there is a recession, and most of the data that they look at right now continues to be strong,” Yellen said in the interview.

“I would be amazed if the NBER would declare this period to be a recession, even if it happens to have two quarters of negative growth. We’ve got a very strong labor market. When you’re creating almost 400,000 jobs a month, that is not a recession.”

A survey conducted last month revealed that many top business executives believe a recession will hit the U.S. economy in early 2023 amid a combination of high inflation and the Federal Reserve’s shift in monetary policy. The Federal Open Market Committee is scheduled to meet on July 26–27, with markets widely looking for a 75-basis-point rate increase.

Some 68 percent of chief financial officers who were polled by CNBC think a recession will take place by early 2023, and no CFO forecast a recession taking place later that the second half of next year. No CFO believed that the economy will avoid a recession, the survey found.

Federal data show that the Consumer Price Index, a monthly measure of inflation, rose to 9.1 percent year-over-year in June 2022, representing the highest figures seen since November 1981.

Last year, Yellen dismissed concerns about soaring inflation and said the rising prices would be “transitory.” But in May, she conceded that she was “wrong then about the path that inflation would take.”