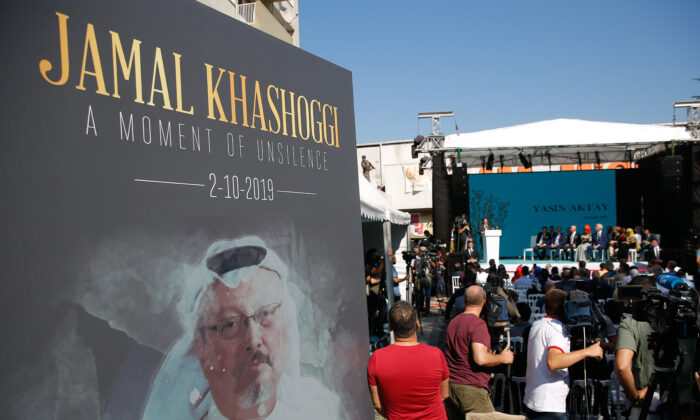 A picture of slain Saudi journalist Jamal Kashoggi, is displayed during a ceremony near the Saudi Arabia consulate in Istanbul on Oct. 2, 2019.(Lefteris Pitarakis/AP)
Politics

The Treasury Department on Friday imposed asset-freeze and prohibition-of-business sanctions against Saudi officials after a government report implicated them in the slaying of U.S.-based journalist Jamal Khashoggi.

Treasury said in an announcement Friday that al Asiri was the “ringleader” responsible for dispatching a 15-man hit squad to murder and dismember Khashoggi in October 2018 inside the Saudi Consulate in Turkey. Several members of the team sent to intercept Khashoggi were members of the “Tiger Squad,” according to the announcement.

“Those involved in the abhorrent killing of Jamal Khashoggi must be held accountable. With this action, Treasury is sanctioning Saudi Arabia’s Rapid Intervention Force and a senior Saudi official who was directly involved in Jamal Khashoggi’s murder,” Treasury Secretary Janet Yellen said in a statement.

“The United States stands united with journalists and political dissidents in opposing threats of violence and intimidation. We will continue to defend the freedom of expression, which is the bedrock of a free society,” she added.

The sanctions block all U.S.-based property and interests held by al Asiri and associates of RIF, and prohibit all transactions with them, including provision of goods or services.

The Biden administration also announced visa restrictions against 76 Saudi citizens on Friday over the Khashoggi killing, although it stopped short of imposing any sanctions on the crown prince, U.S. officials said.

Khashoggi, who wrote opinion columns for the Washington Post critical of the crown prince’s policies, was killed and dismembered by a team of operatives linked to Saudi Crown Prince Mohammed bin Salman.

A declassified intelligence assessment released on Friday in a manner choreographed to limit damage to U.S.-Saudi ties indicated that the Saudi crown prince approved of the operation to capture or assassinate Khashoggi.

Washington choreographed events to soften the blow, with President Joe Biden on Thursday speaking with the crown prince’s 85-year-old father, King Salman, in a call in which both sides said they reaffirmed their decades-old alliance and pledged cooperation.

A second U.S. official noted that, although Saudi citizens were named in the first use of what the State Department called the “Khashoggi Ban” on visas, “it’s really a new global tool” that is part of a new policy aimed at nations that carry out activities against journalists and dissidents beyond their borders. Such activities include efforts to suppress, harass, surveil, threaten or harm them.