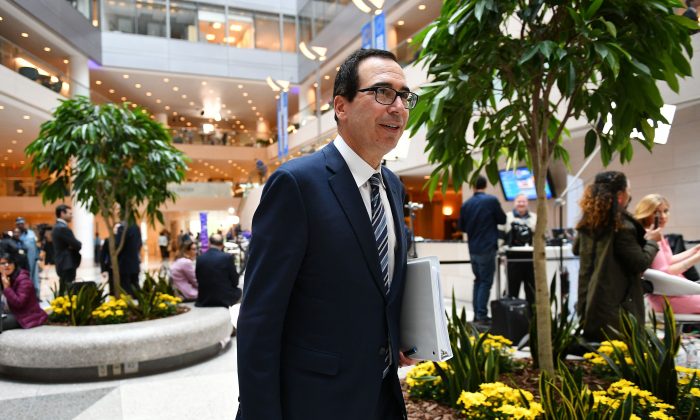 The Treasury Department responded to a “final” April 23 congressional deadline set by a top House Democrat to turn over President Donald Trump’s tax returns with a letter detailing constitutional concerns, setting the stage for a possible court battle between Congress and the administration.

The decision, which was widely expected, could potentially prompt House Ways and Means Committee Chairman Richard Neal (D-Mass.) to subpoena Trump’s tax records as the opening salvo to a legal fight that may ultimately have to be settled by the U.S. Supreme Court. Neal requested six years of Trump’s individual and business tax records.

In an April 23 letter (pdf) to the Committee, Treasury Secretary Steven Mnuchin detailed his constitutional concerns with Neal’s request, describing Neal’s request as “unprecedented.” He said he would provide the committee with a final decision by May 6 after receiving the Justice Department’s legal conclusions.

Mnuchin said he was consulting with the department “due to the serious constitutional questions raised by this request and the serious consequences that a resolution of those questions could have for taxpayer privacy.”

“The Committee’s request has not been denied or granted at this time,” Mnuchin wrote in the letter’s concluding paragraph.

It’s now the second time the administration had missed a House deadline for the tax returns since Neal requested them on April 3.

“The department cannot act upon your request unless and until it is determined to be consistent with the law,” the Treasury secretary wrote.

Republicans have condemned the tax return request as a political “fishing expedition” by Democrats. Meanwhile, Democrats want Trump’s returns as part of their investigations of possible conflicts of interest posed by business interests.

“Secretary Mnuchin notified me that once again, the IRS will miss the deadline for my 6103 request. I plan to consult with counsel about my next steps,” Neal said in a statement.

Presidential candidates have traditionally released their tax returns to the public during their campaign. Trump, a billionaire businessman who has a complex network of business ties around the world, has maintained that he cannot do so, as the IRS is conducting an audit.

Earlier on April 23, the White House said Trump was unlikely to hand over his tax returns. “As I understand it, the president’s pretty clear: Once he’s out of audit, he’ll think about doing it, but he’s not inclined to do so at this time,” White House spokesman Hogan Gidley told Fox News in an interview.

Neal informed IRS Commissioner Charles Rettig earlier in April that failure to comply with the deadline would be viewed as a denial.

“This is not up to the president. We did not ask him,” said a Democratic committee aide, who cited a law saying the Treasury secretary “shall furnish” taxpayer data upon request from an authorized lawmaker.

As Ways and Means chairman, Neal is the only lawmaker in the House of Representatives authorized to request taxpayer information under federal law.

In a letter to the legal counsel of the Treasury Department, William Consovoy, the president’s attorney, outlined the legal groundwork for why it would be a crime to comply with the request, detailing a battery of court precedents protecting Trump’s right to keep his tax returns private.

Consovoy wrote that Neal’s request for the tax returns flouts “fundamental constitutional constraints,” is driven by an intent to score political points, and would set a dangerous precedent if complied with.

Earlier in April, Trump retweeted video footage that shows Rep. Jim Jordan (R-Ohio) saying in an interview, “There’s no law that says they have to be public,” referring to Trump’s tax returns.