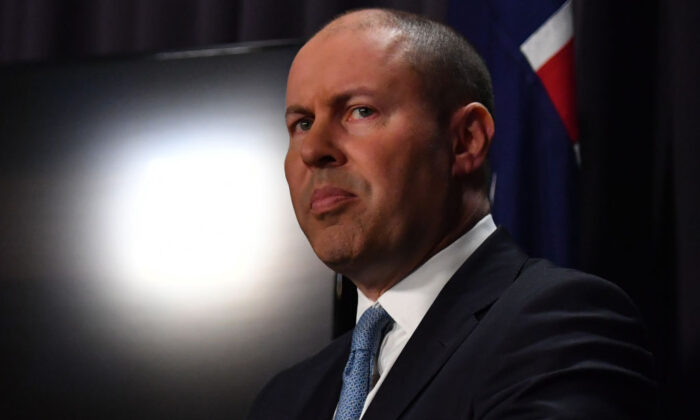 Treasurer Josh Frydenberg during a press conference in the Blue Room at Parliament House in Canberra, Australia, on June 2, 2021. (Sam Mooy/Getty Images)
Australia

Australian Treasurer Josh Frydenberg has rejected calls for companies that profited while receiving JobKeeper to repay the subsidy which was put in place to cushion business owners and workers from the economic impact of the CCP virus pandemic.

The ABC reported that around 35,000 companies had doubled or tripled their turnover, compared to the same quarter in 2019, while receiving JobKeeper payments.

“I would welcome any company that’s in a position to pay back JobKeeper to do so,” Frydenberg told Nine’s Today show.

He went on to say, “But if you’re putting to me that we should go and change the law, retrospectively, on people that applied and received that support in the middle of an economic crisis—I’d say no to that.”

Frydenberg emphasised that 98 percent of the businesses that received JobKeeper were small businesses that faced the potential of a major economic decline similar to the Great Depression.

He said he would oppose any idea potentially put by the Labor Party to make small businesses pay back Jobkeeper—which initially passed with the support of Labor.

Shadow Assistant Treasurer Andrew Leigh has been one of the leading figures in calling for JobKeeper repayments by businesses that experienced increased turnover.

“If you want to do fiscal stimulus, you put the … money in the hands of low-income workers,” Leigh told ABC radio. “The Government didn’t do that with this scheme. It allowed billions of dollars to flow to billionaire shareholders and millionaire CEOs.”

Two days ago, retail giant Harvey Norman reluctantly repaid a portion of its JobKeeper benefits after months of public pressure.

Leigh said the only reason Harvey Norman received public pressure to return the payments is that it’s a listed company on the share market and therefore required to disclose the details.

“But 97 percent of JobKeeper has gone to firms that aren’t listed on stock market and we don’t know about that information,” Leigh said. “We’re having a fight with the Government at the moment in the Senate where we want more transparency.”

Labor senators and Independent Senator Rex Patrick passed a Senate motion in early August that ordered the release of a list of names for all businesses who received JobKeeper in order to achieve greater transparency.

Tax Commissioner Chris Jordan and the treasurer have pushed back against it, warning it could create a dangerous precedent of revealing private information without businesses’ consent.

The Australian Industry Group and the Australian Chamber of Commerce and Industry have urged the senate against pushing for the list to be made public.