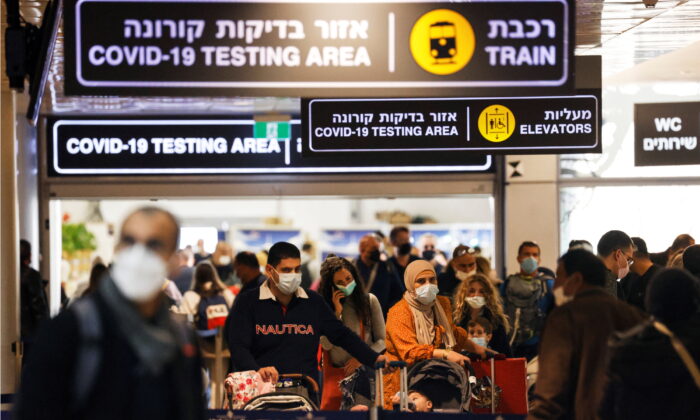 Would-be travelers around the world are considering hitting the pause button on their holiday plans amid the discovery of the new CCP (Chinese Communist Party) virus Omicron variant, travel agents said on Monday.

There is growing concern among scientists about what Omicron’s impact might be, given that it has an unusual combination of mutations and may be able to evade immune responses or be more transmissible.

In response, the European Union and dozens of countries including Australia, Brazil, Canada, Iran, Japan, Thailand, and the United States, have closed their borders or imposed restrictions on a slew of southern African countries in an effort to curb the spread of the newly detected COVID-19 variant.

Israel on Saturday unveiled new plans to ban all foreigners into the country for 14 days, a world-first in the response to Omicron.

A spokesperson for Flight Center Travel Group told Reuters that some Australian travelers who booked through the company have now cancelled or delayed trips after the announcement of new requirements for arrivals to isolate at home or a hotel for 72 hours while awaiting the results of a COVID-19 test.

“We’re not being rushed off our feet,” the spokesperson said of the number of changes to trips. “It is still very early days and people are generally prepared to wait and see what eventuates.”

Currently, Australia’s border remains closed to tourists from all countries except those who are fully vaccinated from New Zealand and Singapore.

While countries across the globe are shutting down their borders and tightening restrictions in response to the new variant, South Korean officials announced Monday that they will “strengthen monitoring for entries and prepare faster systems to test for the variant” but that there are currently “no current plans to close borders to arrivals.”

Meanwhile, the World Health Organization (WHO) on Sunday criticized the “heavy burdens” that travel bans place on southern African nations and urged countries across the globe not to impose flight bans unless they are “scientifically based” amid concerns over the new variant.

In a statement, the public health agency called on countries to “follow science and the International Health Regulations” instead of rushing to impose flight bans, which, the agency said, can drastically affect the livelihoods of people in southern Africa.

“Travel restrictions may play a role in slightly reducing the spread of COVID-19 but place a heavy burden on lives and livelihoods,” the organization said. “If restrictions are implemented, they should not be unnecessarily invasive or intrusive, and should be scientifically based, according to the International Health Regulations which is a legally binding instrument of international law recognized by over 190 nations.”