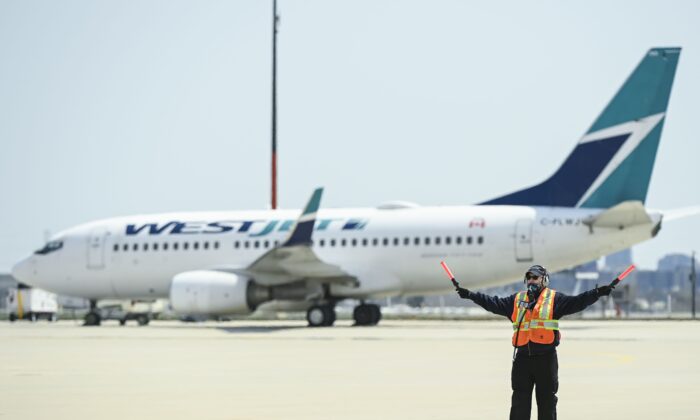 A ground controller works as a WestJet plane sits on the tarmac at Pearson International Airport in Toronto on April 27, 2021. (Nathan Denette/The Canadian Press)
Canada

A Canadian government epidemiologist in charge of reviewing COVID-19 scientific literature testified in court that there is little information available on the impacts of vaccination on in-flight transmission of the virus.

“There are not many studies that look at vaccination status, most of the research that’s been done occurred prior to widespread vaccination,” said Dr. Lisa Waddell of the Emerging Sciences Group at the Public Health Agency of Canada (PHAC).

Waddell also said she was not aware whether the Canadian government undertook its own independent study to assess the impacts of vaccination on in-flight transmission.

Waddell testified as a government witness on May 31 in defence of the government’s vaccine mandate in travel. The Liberals suspended the travel mandate (barring international arrivals) on June 20, warning it could be brought back depending on circumstances.

Four lawsuits are currently challenging the mandate in federal court and are being processed simultaneously. While the government wants the court to declare the challenge moot, applicants still want the case heard by a judge.

Waddell submitted an affidavit supporting the government’s position, highlighting her criticism of experts’ reports presented by the applicants.

For example, she says one expert report on in-flight transmission did not mention an October 2021 study published in the Journal of Travel Medicine, titled “A SARS-CoV-2 Delta variant outbreak on airplane: vaccinated air passengers are more protected than unvaccinated.”

“Vaccination was suggested to have a protective effect (risk ratio: 0.33, 95% CI: 0.08–1.43) but was not statistically significant in the multivariate analysis,” said the study investigating a June 2021 flight from South Africa to China.

Waddel said most of the studies she reviewed have deficiencies, with a “high risk of bias because of their retrospective investigations of in-flight transmission.”

“We also have a number of simulation type studies that are based obviously on a lot of assumptions of whatever was known at the time,” Waddell said.

Waddell and her team were responsible for reviewing and assessing the evidence regarding in-flight transmission of the SARS-CoV-2 virus, which causes COVID-19.

They summarized their findings in the Nov. 25, 2021, report “Evidence on the risk of COVID-19 transmission in flight: update 3.”

“Across reviews, the risk of infection during a flight is low,” says the report.

“A meta-analysis found that from January–June 2020, the risk of being infected with SARS-CoV-2 in an airplane cabin was estimated to be 1 case for every 1.7 million travelers.”

Waddell testified she considers that to be low risk.

The report also says that “in-flight particle numbers in the air in airplanes are lower than that of retail/grocery stores, restaurants, office spaces, homes, and other forms of transport.”

The PHAC official confirmed during cross-examination that no subsequent analysis was produced after Nov. 25.

Given the time elapsed between the publication of the report in November and her cross-examination in May, Waddell was asked if any new studies had been published examining the impacts of vaccination on in-flight transmission.

“So, we looked to see what had been published since the [report] … And there doesn’t seem to be any more statistics on vaccination as a potential protective effect from in-flight transmission,” she said.

She was asked if she agreed her report does not identify vaccination as one of the strategies to mitigate in-flight risks.

“There wasn’t a lot of evidence on that so, as a strategy as a whole, it has not been evaluated in the literature and therefore is not elaborated in the review,” Waddell answered.

Waddell also said that the PHAC brief did not recommend vaccination as a requirement to travel by air.

The government presented 16 witnesses and experts in court to defend the mandate. The Epoch Times has reviewed the affidavits and cross-examination of four of them that are available.

Jennifer Little, director general of the COVID Recovery Team at Transport Canada, wrote the travel mandate policy and testified on June 9 and 10 that neither PHAC nor its parent department Health Canada had made a recommendation for the mandate.

Another witness, who has sat on an advisory group to chief public health officer Dr. Theresa Tam since December 2021, said the issue of mandates and COVID-19 in transportation was rarely discussed.

“I do not recall any such presentation of data,” responded Dr. Eleni Galanis when asked if anyone presented any data or analysis relating to COVID-19 in the transportation sector during meetings with Dr. Tam.