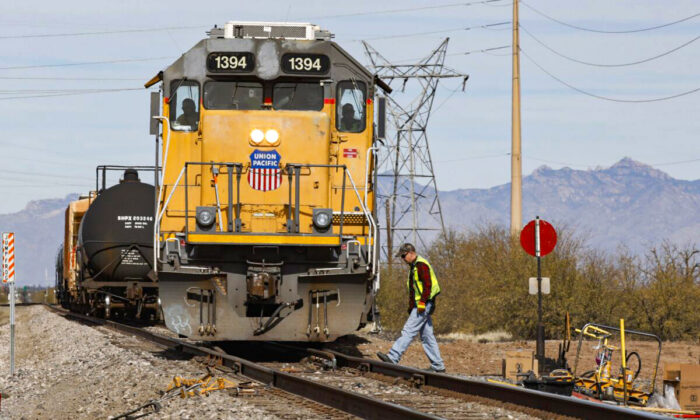 Rail backlogs in the United States are delaying the shipment of grains, and further exacerbating inflation, industry experts said at a hearing this week addressing urgent freight rail service issues.

“In recent weeks the board has received communications from a broad range of stakeholders of serious problems affecting the freight rail network, namely inconsistent and unreliable service which has had serious impacts on rail users, particularly those shipping agriculture and energy products,” said Martin J. Oberman, chairman of the Surface Transportation Board (STB), which oversees Class I rail carriers and which held a hearing this week.

“This is the price of bread going up. This is ethanol not getting mixed with gasoline, and the price at the pump going up,” Oberman said.

In a letter to STB, Jon Setterdahl, the product and services Leader at Landus Cooperative, a farmer-owned cooperative headquartered in Ames, Iowa, said that rail transit times have more than doubled in recent months.

The cooperative, which purchases grain from 7,000 farmers across Iowa, said it had turned away farmer loads of corn and soybeans because grain storage elevators waited 20 days for rail carriers to pick up loaded grain cars. Previously, they had waited a week and a half.

“This delay in March consisted in a total [of] five trains being delayed into April, which is a total shortage of grain shipments in that month alone of 2.250 million bushels,” said Setterdahl.

While food prices across the United States and the rest of the world have been steadily increasing since the COVID-19 pandemic and disruptions to the supply chain, the ongoing Russia-Ukraine conflict has driven them up further.

This is in part due to the fact that many of the Ukrainian farmers who produce a significant amount of the world’s wheat are now fighting Russians, while crucial staple crops are also being impacted and prevented from being exported to the rest of the world.

Russia and Ukraine are key exporters of grain, supplying nearly 30 percent of wheat and nearly 20 percent of corn in the global market.

The full-scale invasion by Russian forces in Ukraine prompted the World Bank earlier this month to warn of a potential “human catastrophe” from a food crisis, which could see hundreds of millions of people forced into poverty.

Meanwhile, food prices were up nearly 13 percent in March, the highest on record since 1990, according to the United Nations’ FAO Food Price Index.

Rail carriers have blamed the delays in shipments on recent extreme weather as well as a surge in demand at the end of 2021.

But shippers say labor supply cuts, storing locomotives to save fuel, and increasing train length to as long as 3 miles (4.8 km), have contributed to the delays, with the latter allegedly creating more congestion.

Earlier this month, the President of the Transportation Trades Department of the AFL-CIO, a coalition of 37 member unions, wrote in a letter sent to the Surface Transportation Board that service disruptions and thus delays in shipments were in part due to labor shortages.

“The notion that our nation’s food supply chain is threatened by the continued negligence and intransigence of the railroad industry is both stunning and unacceptable,” President Greg Regan wrote.

Regan noted that in the five years prior to the COVID-19 pandemic, BNSF slashed its Railway T&E employment by 27 percent, Norfolk Southern by 24 percent, and Union Pacific by 32 percent, Regan wrote.

“We urge the Board to continue to delve into the service issues faced by shippers, and how these issues have been caused or exacerbated by an overly reduced workforce,” he wrote.

But Eamon Monahan, vice president of environmental affairs for the Corn Refiners Association on Thursday said the issue of freight delays had been going on for years.

“When the railroads talk about this being a COVID issue or related to labor shortages across the economy, that’s their latest excuse,” said Monahan. “This is absolutely a years-long issue.”