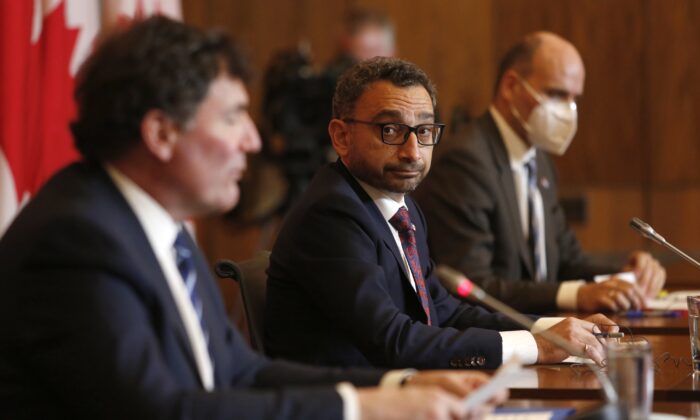 A briefing presented to Transport Minister Omar Alghabra on Oct. 2, 2021, regarding the implementation of the mandate said the strict requirement for vaccination without the alternative to present a negative COVID-19 test would create a “very strong impetus to drive vaccination.”

Signed on Oct. 29, the memo says a mandate was needed to protect the safety of the transportation system and the “passengers needed to realize recovery.”

“An indirect benefit is that it should act as a catalyst to increase Canada’s overall vaccination rate,” it says.

The documents were filed in federal court and relate to the four lawsuits that are challenging the travel mandate.

The Liberal government suspended the domestic travel mandate on June 20 with a warning it could be brought back at any time. Nevertheless, the attorney-general is attempting to have the lawsuits declared moot and thrown out.

Challengers argue the issue is still unsettled and the potential breaches of charter rights need to be addressed in court.

The October memo further said that despite already high vaccination rates, “there still remains a number of eligible Canadians who have not been fully vaccinated. This represents a challenge for a number of reasons.”

Among the reasons, it noted children under 12 being “unable to be vaccinated and cannot enjoy the protections afforded through vaccine-derived immunity,” and other individuals unable to get vaccinated for medical reasons.

“As a result of these factors, it is necessary to ensure a higher rate of vaccination, with very minimal exceptions, across the travelling population for the full benefits of the vaccine to be realized and minimize the risks of COVID-19,” the memo says.

The different forms of vaccine mandates, whether for travel or public service, and provincial vaccine passport schemes, were seen by public health officials as successful in driving uptake.

“We saw a plateau in the uptake of vaccines after a really tremendous effort by Canadians, and then after the introduction of vaccine mandates by the various provinces and territories and jurisdictions, we did see an uptick.”

While the vaccine mandate also covered trains and some marine vessels, it was the inability to fly that had the most impact on unvaccinated Canadians who needed to get quickly to their destination.

In its internal documents, Transport Canada made the case for the vaccine mandate while having previously assessed the risk of in-flight transmission as being low.

In a brief prepared in November 2020 titled “Risk of COVID-19 Transmission Aboard Aircraft,” the department wrote that “while it is true that air travel can result in the importation of passengers with COVID-19, the risk of spread of COVID-19 amongst passengers while traveling aboard aircraft appears to be low.”

It cites an October 2020 press release from the International Air Transport Association saying there had been a rate of one flight-related transmission for 27 million travellers.

Also mentioned in the brief were details about passenger airplane filtration systems, which greatly reduce the spread of viruses through aerosol.

At that time, the more contagious Delta variant of the virus SARS-CoV-2 that causes COVID-19 was not in circulation.

It’s on that basis that Jennifer Little, the Transport Canada official who wrote the mandate policy, said she rejected a similar assessment produced by the Public Health Agency of Canada (PHAC).

The PHAC assessment on in-flight transmission was produced by the team in charge of reviewing essentially all COVID-19 scientific literature.

At the time when the mandate policy was being written, around August 2021, PHAC’s assessment contained information up to May 2021.

“In my view this document was not specifically relevant to [a] vaccination mandate because it did not provide current data in the context of the higher transmissibility of the Delta VOC [variant of concern],” Little wrote in her April affidavit supporting the government’s mandate.

Little was challenged during cross-examination in June as to how she could make that judgment call since she doesn’t have a scientific background.

Little was responsible for producing the Oct. 2 briefing for Alghabra and was also likely involved in writing the memorandum, with her COVID Recovery Team being part of Transport Canada’s Safety and Security Group.