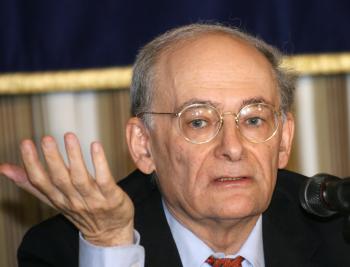 Human rights lawyer David Matas in 2006, called for the Japanese government to ban Japanese seeking organ transplants in China, because of harvesting of organs from Falun Gong practitioners. (Yoshikazu Tsuno/AFP/Getty Images)
US

Matthew Little
Matthew Little is a multi-media reporter for The Epoch Times.
View profile
Follow
biggersmaller
Print
The Canadian Society of Transplantation has become the first organization of its kind to pass a policy directing doctors how to deal with patients who want to become transplant tourists. The policy comes amidst the rise of transplant tourism around the world, and has been praised by human rights activists who have long objected to organ harvesting from unwilling and innocent victims.

The policy was discussed at the 23rd International Congress of the Transplantation Society, an international organization created to develop the science and clinical practice of organ transplants as well as provide guidance on the ethical practice of such procedures.

Among the presenters this year was Winnipeg-based Nobel Prize nominee human rights lawyer David Matas, who praised the policy.

Matas, working together with David Kilgour, a former Canadian MP and secretary of state, Asia Pacific, has published a report and book about illicit organ harvesting from Falun Gong prisoners of conscience in China.

The policy arose out of directives from earlier meetings of the World Health Assembly that urged member states to take measures to protect the poorest and most vulnerable groups from transplant tourism and the sale of tissues and organs.

“The entire transplant tourism industry relies on secrecy, making it impossible to determine whether donor information provided by organ brokers, who are motivated by financial gain, is accurate,” reads the policy.

If a patient goes ahead with an organ purchase, the new policy also gives doctors the right to refuse to provide medical records, medication, or take other actions that may facilitate the patient obtaining a purchased organ.

“There is substantial evidence that the illegal transplantation of organs in an unregulated system poses significant risk to both recipients and organ vendors. Therefore, individual physicians may elect not to provide medical records to patients if they believe the information will be used in support of an illegal transplant performed in an unregulated system and that there is a significant risk of harm to the patient or organ vendor,” reads the policy.

Speaking with The Epoch Times during the congress, Matas talked about the Chinese regime's gruesome practice of sourcing organs from death row prisoners and live Falun Gong practitioners imprisoned for their spiritual beliefs.

“They admit they're killing prisoners for their organs, they don't admit they are Falun Gong practitioners, but they admit it's prisoners,” said Matas of the regime.

Matas said the international community needs to speak out against organ harvesting and that recently there has been a surge of interest in the issue as human rights groups and others take action.

“What we are seeing is more and more opposition for the sourcing of organs from prisoners.”

Last week Amnesty International issued a call for countries to stop using organs from executed prisoners, singling out China for doing this, a practice Amnesty has documented since 1993.

Amnesty was among leaders from pharmaceutical companies and experts that participated in the congress last Monday and Tuesday.

Matas said Novartis, a major pharmaceutical company, answered a call by Amnesty to stop participating in clinical trials in China of anti-rejection drugs used to keep a patients immune system from rejecting a transplanted organ.

Matas said if one pharmaceutical company steps up, others may follow.