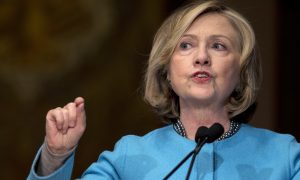 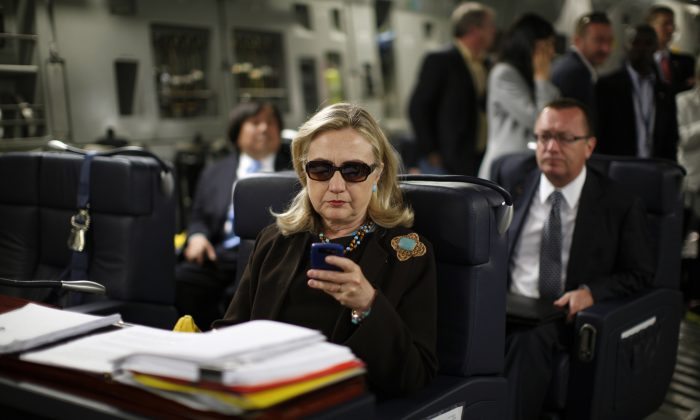 Then-Secretary of State Hillary Rodham Clinton checks her Blackberry from a desk inside a C-17 military plane upon her departure from Malta, in the Mediterranean Sea, on Oct. 18, 2011. (AP Photo/Kevin Lamarque)
US

The Security Threat of @ClintonEmail.com

Rather than use a secure email account from the State Department, Hillary Clinton was allegedly using her personal email account during her four years as secretary of state.

Clinton had “exclusively used” the personal email account, and in doing so may have violated rules from the Federal Records Act, reported The New York Times on Tuesday. It is allegedly the first case of a high-ranking official solely using a personal email account in his or her government work.

There are plenty of security risks behind a government official using a private email service—the main one being that the email servers would become prime targets for foreign intelligence agencies, and would likely use lower-level security.

The email accounts for Barack Obama and John McCain’s presidential campaigns were both hacked by China in 2008, for example. But spies aside, emails from internal government networks are not necessarily secure either—as the world has witnessed with the ongoing leaked information from groups like WikiLeaks.

The other problems with Clinton’s exclusive use of private email accounts center around transparency and public trust.

Vox notes the irony. It reported that in early 2009, when Clinton became secretary of state, the Bush administration was being criticized for using private emails.

At least one of the alleged emails Clinton was using is hdr22@clintonemail.com, which according to the WHOIS registry, uses a domain Clinton registered with Network Solutions on Jan. 13, 2009.

It’s unclear which email plan Clinton used, but Network Solutions offers four email plans with some basic security features. One service they offer is LOQMail, which allows users to send and receive encrypted emails, although it’s unclear whether Clinton used the service.