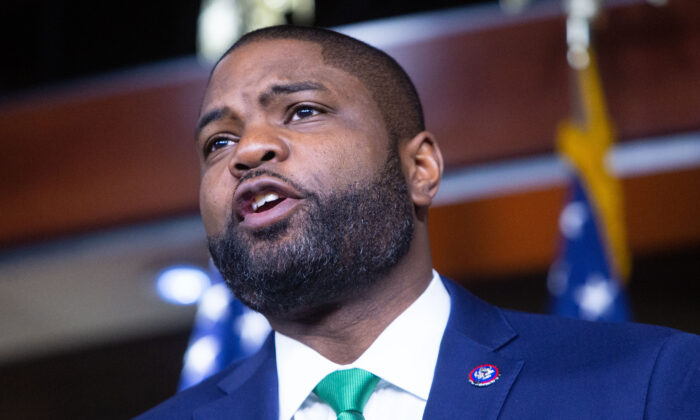 Rep. Byron Donalds (R-Fla.) speaks in Washington in a file image. He is one of the members of Congress calling for the FDA to re-post a document that was taken offline. (Allison Shelley/Getty Images)
US News

The Food and Drug Administration (FDA) is under fire after taking a key document offline following questioning from The Epoch Times.

Multiple members of Congress are calling for the agency to quickly repost the document, which detailed why the agency decided to approve Moderna’s COVID-19 vaccine.

“Lack of transparency, mixed messaging, and the continued failure to ‘follow the science’ have sown massive distrust in the medical science field, and they have no one to blame but themselves,” Rep. Byron Donalds (R-Fla.), a member of the House Oversight Committee, told The Epoch Times in an emailed statement. “The coincidental removal of the approval documents for the Moderna vaccine is another massive blow to the credibility of the FDA, and I call on the agency to release this document immediately.”

Rep. Clay Higgins (R-La.), another member of the panel, added: “The FDA is intentionally concealing this data from America’s citizenry, many of whom have serious and legitimate concerns about the COVID vaccines. This type of transparency failure is exactly why many Americans don’t trust the government and don’t want to receive a COVID vaccine.”

The document was posted on the FDA’s website on Feb. 1, a day after the agency granted approval for the Moderna jab.

After The Epoch Times sent questions regarding some of the details in it, the document was taken offline.

The link to the page now says: “We’re sorry. The page you are looking for is not available for one of the following reasons. The link to this page may not be correct or is out-of-date. You have bookmarked a page that has moved.”

An FDA spokesperson told The Epoch Times on Friday: “I don’t have any more info. I know they’re still working on it.”

“I don’t know what happened. But I will let you know as soon as I hear that it’s fixed,” she added.

The document has been offline for over 30 hours.

In it, the agency revealed that a meta-analysis of four health care claims databases estimated that, among males aged 18 to 25, the rate of myocarditis following Moderna’s primary series was 148 per million males vaccinated.

That’s a higher rate of myocarditis detected after Moderna’s vaccine than any government agency has offered before, and comes after several studies found young people, particularly young men, are at greater risk of developing the form of heart inflammation from Moderna’s jab than from COVID-19 itself.

Dr. Dorian Fink, an FDA official, did not mention the document’s disappearance while speaking to a government vaccine advisory panel on Friday.

“Throughout this pandemic I have been disappointed in the FDA’s transparency,” Rep. Ralph Norman (R-S.C.), who sits on the oversight committee, told The Epoch Times in an emailed statement. “Requesting 75 years to release data used to approve the Pfizer vaccine in 108 days was not a good look. I’ll be interested to see how this develops and appreciate those working to hold the agency accountable.”

Rep. Earl “Buddy” Carter (R-Ga.), a member of the House Committee on Energy and Commerce’s Health Subcommittee, added: “I believe the vaccines, which were developed under President [Donald] Trump, are safe and effective. Unfortunately, the Biden Administration’s consistent lack of transparency with public health data and pandemic guidance is fueling skepticism. All information about the vaccines must be made available so that people can make the decision that makes the most sense for them.”