Transgender Surgeries Are No ‘Cure’ for Distressed Youths, Doctor Says 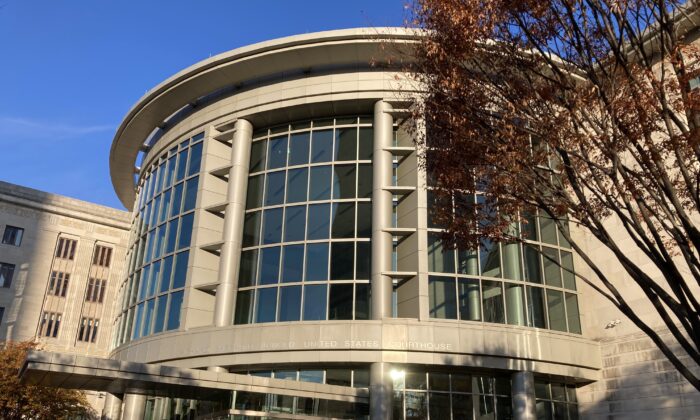 This federal courthouse in Little Rock, Ark., is the scene of a trial over the nation's first law banning transgender treatment for minors, photographed on Nov. 28, 2022. (Janice Hisle/The Epoch Times)
By Janice Hisle

LITTLE ROCK, Ark.—Surgically removing body parts and destroying healthy human function “violates one of the most fundamental principles of plastic surgery,” Dr. Patrick Lappert testified, explaining why he refuses to remove breasts from females who seek to appear male.

Lappert took the stand on Nov. 29 in federal court as a witness for the state of Arkansas, which is defending a legal challenge on a law banning transgender medical procedures for minors.

Those procedures include hormones and surgeries, such as double mastectomies, which “gender-affirming care” proponents champion as a cure for girls who are distressed over their bodies’ female attributes.

Earlier this year, Lappert testified in favor of a similar measure in Alabama, where he’s based.

The Arkansas trial began in October but recessed for a month before resuming with testimony intended to support the Arkansas Save Adolescents from Experimentation (SAFE) Act. That law has been on hold while the legal battle, which started right after the law’s passage in April 2021, continues.

Attorneys from the American Civil Liberties Union want the law struck down as unconstitutional. One of their main arguments is that it’s discriminatory for the state to prohibit medical procedures for transgender purposes yet allow them for other reasons.

But Lappert testified that in his private surgery practice, he refuses to perform certain procedures depending on the intended purpose—a nod to the law that seeks to forbid procedures for “gender-transition” purposes.

It’s acceptable to enhance breasts for a grown woman who has finished her childbearing years; it’s not appropriate to do that for a teen who isn’t finished growing and whose future ability to breastfeed an infant might be jeopardized, he said.

Inside the Patient’s Mind

As a plastic and reconstructive surgeon, Lappert said he must dabble in psychology as well. It’s essential to consider the patient’s reasons for wanting the surgery, along with the form and function of the body parts that the patient wants to surgically alter, he said.

For example, there’s a difference between breast augmentation surgery for a woman who just finds that look to be “aesthetically” pleasing versus one who thinks that having bigger breasts would prevent her from losing her intimate partner, he said.

Likewise, it’s one thing to remove breasts from a cancer patient; it’s another to do double mastectomies on young patients who believe that body alteration will cure them of distress over their transgender identity, according to Lappert.

Yet that’s among the procedures labeled “gender-affirming care”—procedures that the SAFE Act seeks to outlaw.

Surgeons are responsible for ferreting out patients who harbor unrealistic beliefs about the benefits of the surgeries they seek, Lappert said. These patients have “an expectation of happiness that is not achievable through plastic surgery.”

They may blame their sorrows on a physical attribute “because they don’t want to look at the actual cause of their sorrow,” he said.

These patients are seeking a surgical solution to an internal conflict, according to Lappert.

As he pointedly stated in a written court filing, “You cannot heal a psychological wound with cosmetic surgery.”

Dismissing such concerns and giving patients what they want in the pursuit of happiness is unethical, he said.

Because the novelty wears off after an initial period of post-surgery euphoria, such a patient “is left with the same sorrow and a bill for plastic surgery, and their hopes have not been realized,” Lappert said.

Before Lappert took the stand, spotty internet connections interrupted the live video testimony of an expert witness, sociologist Mark Regnerus, who was testifying while out of the country.

A court stenographer’s machine also malfunctioned, forcing another five-minute delay in the proceedings while a replacement stenographer was summoned and set up.

Moody also repeatedly interjected with questions about the purpose of Regnerus’s testimony.

A lawyer for the plaintiff, Daniel Richardson, appeared to have boxed Regnerus into a corner, as he got the witness to acknowledge that his sole expertise is in the field of sociology.

Then, Richardson objected to any questions that Dylan Jacobs, a deputy solicitor general for Attorney General Leslie Rutledge, tried to ask outside that boundary.

Moody also kept admonishing Jacobs about the form and intent of his questions.

“Where are we going with this, Mr. Jacobs? … I need to know what his expertise is going to do to help me answer my questions … beyond the average layperson,” Moody said.

He raked both palms down his cheeks in frustration. But he occasionally overruled objections from opposing counsel and acknowledged that he was giving Jacobs the chance to “make a record.”

Jacobs did seem to score a few points when he got Regnerus to discuss how his review of articles and discourse revealed a possible “Castro Consensus” about the best way to help youths who are experiencing gender dysphoria.

Such a forced consensus masquerades as truth, according to Regnerus.

“Truth becomes whatever the ‘consensus’ says it is,” he said.

A sociology professor at the University of Texas–Austin, Regnerus said he viewed the transgender phenomenon using his training as a sociologist to study how it has morphed.

He also said he suspects “ideological capture” has taken hold.

Activists have attacked dissenters who oppose transgender medical procedures; some have lost their jobs or been demoted simply by documenting phenomena that they observe, he said.

Thus, activists also appear to have swayed the viewpoints of large professional organizations such as the American Medical Association and the American Academy of Pediatrics. The activists have latched onto the authority of those organizations to promote a specific agenda and belief system, Regnerus said.

He also noted that changes in language, seemingly driven by ideology, are influencing the way researchers work. One example is the increasing use of the term “sex assigned at birth.”

For as long as almost anyone can recall, “we had the understanding that sex is ‘observed’” and that anyone can tell a baby’s sex—boy or girl—just by taking a peek.

But now, Regnerus said, “We actually put surveys in front of people that ask, ‘What is your sex assigned at birth?’”

Use of this new terminology shows that “there is a particular value embedded,” he said.

“It signals the ideological capture of … the method by which we document basic things,” Regnerus said.